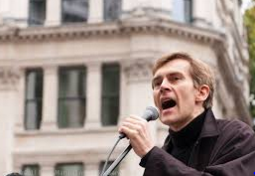 I was curious to see how Newsnight would tackle one of the biggest UK party political talking points of the week - the highly controversial appointment of the Guardian's Seumas Milne to be Jeremy Corbyn's chief strategist.

Newsnight's editor Ian Katz was, of course, a long-time colleague of Infamous Seumas at the Guardian, so would it be kid gloves' treatment for the story as a result?

Would the controversy be the focus of a entire Newsnight segment? Or would it be ignored?

Well neither, it turned out. On Wednesday's edition Labour MP Lisa Nandy was asked a single question about it. She answered (or rather waffled) and then the interview ended with no follow-up question.

For me, that felt like a token gesture to show that the programme had tackled the subject (a spot of watertight oversight).

Judge for yourselves though. This was Kirsty Wark's question:

One of the main developments has been the very critical appointment to the future of the Jeremy Corbyn term, which is the head of strategy, and that is Seumas Milne. Now, people have been looking at his whole back catalogue and he's got some very strong opinions, expressed in a number of articles. I'm just going to put a couple to you. Milosevic shouldn't have been tried at the Hague. That was one of them. The murder of Lee Rigby wasn't terrorism in the normal sense, as an indiscriminate attack on civilians. And as far as he's written about Ukraine, "There certainly has been military expansionism but it's overwhelmingly come from NATO and not from Moscow". Now, he is going to be involved in strategy for the next five years. Do you agree with these statements?

Now, given the wealth of quotes that have been reported already (and they keep on coming) - about 9/11, 7/7, our soldiers in Iraq, Hamas, the victims of Stalin, etc - a few follow-ups might have been expected, Paxman-style, mightn't they? They never came.

Still, in fairness to the increasing crazy world we live in, I have to note that the massed ranks of Corbynistas on Newsnight found even this one question too much: It was a pointless question. Newsnight was 'apeing tabloids again'. There were 'shades of McCarthyism' here. It was 'shameless anti Jeremy Corbyn bias'.
Posted by Craig at 14:06