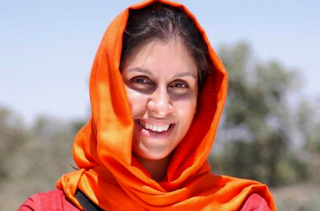 Alan at Biased BBC has ferreted out a 1st November report from the Independent that, in the light of everything that's followed on the Boris/Nazanin Zaghari-Ratcliffe story, makes for fascinating reading.

The game-changer was an Iranian judicial decision (if it can be dignified with such a term) to bring her back to court on the basis of Boris's remarks.

Partisans here are getting fired up, and - weirdly - Brexit seems to be the dividing line.

Michael Gove has now found himself attracting flak too for his comments about the case on this morning's Andrew Marr Show. Mr Gove was defending Boris Johnson and, in doing so and in responding to a question from Andrew Marr ("What was she doing when she went to Iran?"), replied "I don't know". And when pressed ("You say that you don’t know what she was doing. Her husband is very clear that she was there on holiday with her child") replied, "Well, in that case I take exactly her husband’s assurance in that regard". And when Andrew pressed again ("So was she training journalists?") replied, "Well, her husband said that she was there on holiday, and her husband is the person who should know."

To some he was merely being honest; to others he was compounding the lie about Mrs Zaghari-Ratcliffe.

The fired-up Brexit Partisan brigades then began amplifying it all - "You're jumping on an anti-Brexit bandwagon", "No, you're a bunch of nasty right-wingers determined to protect Johnson at all costs", etc.

And the BBC, whose lead reporters have been vocal and unequivocal (especially on Twitter) in their criticism of Boris Johnson over this, splashed their news website for a while today with:

Ah for the days when the likes of Lord Palmerston could order in British forces and daringly rescue distressed damsels like Mrs Zaghari-Ratcliffe from the clutches of foreign tyrants!

I do hope this turns out well for her and her family. And soon.

Meanwhile, on the 'complaints from both sides' front, here's James O'Brien - occasional Newsnight presenter - complaining about The Andrew Marr Show, and the programme's editor (as he does) then responding to that criticism: 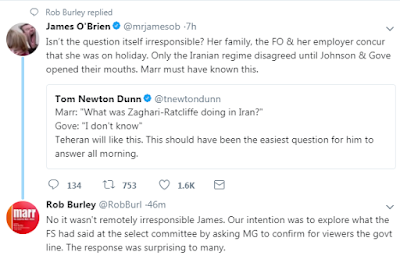 James O'Brien doesn't strike me as the sort who'll ever let someone else have the last word, so this is bound to go on until even Rob loses the will to live and gives JO'B the final say.
Posted by Craig at 20:09