Sioned Wiliam, Radio 4's Commissioning Editor for Comedy, is no mean comedienne herself - at least if her Feedback interview with Roger Bolton today is anything to go by.

She played the part of a parody version of a BBC editor responding to charges of bias and denying everything, but so badly that she ended up making a complete dunderhead of 'herself'.

She was absolutely brilliant. It's the best satire I've heard on Radio 4 in a long while and her performance couldn't be bettered. I almost believed she was 'for real'.

Seriously, Sioned should be given her own Radio 4 series. (And, being Radio 4's Commissioning Editor for Comedy, if she can't commission herself, who can?). She has a great catchphrase too - "I don't think I agree".

Roger Bolton made for a wonderful straight man here too. [And a genuine 'all credit to him' for his probing today].

Here's part of the script:

Roger Bolton: Well, let's turn to a political issue. It couldn't be more controversial at the moment. Sue Cooper wrote to us about Brexit.


Sue Cooper: I have to say that I am deeply disappointed by the way News Quiz has taken a very left wing and anti-Brexit stance. It used to be funny but it is now very biased. And when they start off arrogantly treating those who voted Leave as though they are completely stupid I reach for the 'Off' switch'.


Roger Bolton: Do you think Sue has a point?


Sioned Wiliam: Well, I don't agree that it's coming from one position. We have a range of political voices on...


Roger Bolton: [interrupting] Oh no. If you listen to it consistently....I am not taking sides, but it is clear that the majority of jokes are broadly anti-Brexit.
Sioned Wiliam: I don't think I agree. I mean, actually, if you look at the last series. There were three episodes in which Brexit didn't feature at all....
Roger Bolton: [interrupting] No, but when Brexit is raised, on the whole, most people's view would be that the majority of jokes are, if you, like opposed, as it were, against Brexiteers.
Sioned Wiliam: I don't think I do agree....

I've been informed by sources close to the BBC that this was not satire.

It was a real interview. Sioned Wiliam was actually being serious and not - repeat not - engaging in comedy gold after all.

I'm in shock, and will need to take a break to recover.

After getting over my disappointment I decided, being a blogger about BBC bias, to put Sioned's Panglossian statements to the test by listening to tonight's The Now Show (which Roger and Sioned moved onto later).

And, guess what? There were plenty of anti-Brexit jokes from Steve 'n' Hugh but not a single pro-Brexit joke/anti-EU joke.

Listen for yourselves. Not one pro-Brexit joke and lots of anti-Brexit jokes. (The first five minutes will suffice if you're pressed for time).

And except for one mild dig at Jeremy Corbyn - later 'balanced' by a segment seriously citing his views on austerity and then running with a series of vaguely-anti-austerity gags - the targets were utterly predictable: Trump, Mrs May, Boris, the DUP, Nigel Farage, Brexit, Greggs. (Even Mugabe and Kim Jong-un got off lightly in comparison, Yes, really, they did!).

Now that I know that Sioned wasn't just pretending to be a completely idiotic BBC high-up, I'm becoming seriously worried about her.

If she genuinely believes that programmes like The Now Show and The News Quiz are 'balanced' because they invite on people like Hugo Rifkind and Danny Finkelstein, who she went on to name in her defence - despite both of them having voted for us to remain in the EU - then she is seriously delusional.

Maybe she needs a few months off. May I suggest that she use her presumably huge BBC salary to book into Morecambe's magnificent Midland Hotel and partake of the sea air and the spectacular Lakeland views for several weeks.

She's clearly in need of it. (And I'll buy her a large glass of wine).

And as for The Now Show itself, good grief! Please hire a vet to put me to sleep before I ever listen to it again.

The new 'talent' really needs to try harder. The old 'talent' is tired.

You used to mock The Now Show... 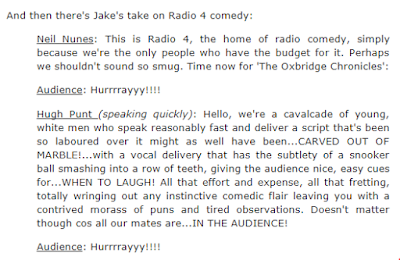 ...and then you 'self-censored' that bit of your famous Radio 4 satire when Radio 4 granted you your own one-off...

...and now, garlic and stake readied, you've become a The Now Show regular, simply pandering to the Radio 4 studio audience types . (Sell out!)

I don't blame you actually. Why not? Grab the loot from the BBC licence fee payer and get the BBC Pension Fund lawyers to help you stash most of it in a Caribbean tax haven.

That's my advice, and you'd be wise to take it.