I have friends - I once had friends - who are avid Guardian readers.. They see themselves as humanitarians, libertarians and socialists. They are undoubtedly middle class so I suppose it’s the Guardian that has made them into inverted snobs. They are staunchly a-religious and they take a dim view of Islamic fundamentalism and, obviously, terrorism. However, they have absorbed every melodramatic detail of the tragic Nakba / catastrophe. Why they chose to follow the Palestinian/Arab narrative exclusively, and so religiously, I have no clue. It’s as though they have abandoned reason. To me this is a complete, logic-defying mystery. However, their opinions are what they are and, by the atheist God almighty, they’re sticking to them.
The reason behind this can only be latent antisemitism; but they don’t see it. They would be mortified at such an idea.

Under the general umbrella of “Stolen Land”, their view of the creation of Israel goes like so: Indigenous “Palestinians” were forced out of their homes at gunpoint by interloping European and American Jews who were mysteriously authorised to do so, illegally, by the British.
They are the very types who claim they don’t hate Israel, only “What Israel is doing” .

Recently, the Guardian featured a typically disingenuous article by Mahmoud Abbas, titled: “Britain must atone for the Balfour declaration – and 100 years of suffering” h
UK media Watch has given it a thorough Fisking. But of course, my ex-friends won’t see this, and even if they did they would be sure to take the Mandy Rice Davies approach.

PMW has another deconstruction of Abbas’s account of ‘the greatest crime in the history of mankind”, which my ex-friends and their fellow Guardian readers are even more unlikely to see.

Oh well. That’s what this country is like these days. Here is Theresa May’s curate’s egg of a speech followed by a moving speech by Israel’s PM. at the Balfour Dinner, which I hope the shadow foreign secretary enjoyed.


Now, there's the Andrew Neil thing that everyone is talking about, and finally this strangely gleeful BBC report by James Landale about a scandalous breach of the ministerial code of conduct.
“I put a long list of questions to her department about this”.

He would, wouldn’t he. 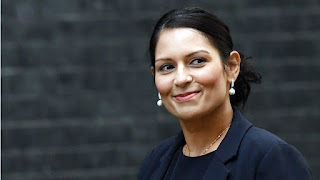