A piece of news tonight... 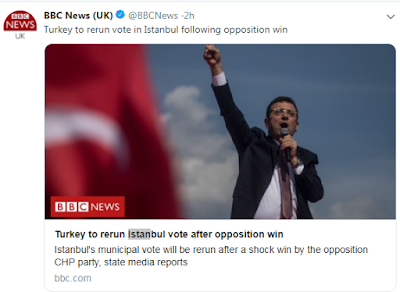 ...and a tweet from former BBC presenter/reporter Gavin Esler...

These two things have jointly spurred me on to totally re-think my world view.

In that spirit I wrote the following earlier this evening:

I see that Turkey's President Erdogan is giving the people of Istanbul a confirmatory vote on their recent municipal election.

That was supposedly 'won' by the opposition CHP (who funds them?) via the so-called ballot box.

Some might say that Mr. Erdogan is simply re-running the election because he lost and that he's a bad loser and anti-democratic. But, despite all the evidence, that's surely nonsense. He's only re-running the election because he rightly thinks that the people of Istanbul deserve a people's vote and a chance to re-visit their earlier (wrong) decision.

All those anti-Erdogan types claiming that they are the democrats ought to be made to answer this simple question: How can anyone who claims to be a democrat say that re-running an election won by the opposition isn't democratic? What could be more democratic than holding another vote?

And Turkish TV must stop giving airtime to the 'village idiots' of the CHP - the dubious Gulanist supposed "think tanks" and pseudo-experts among CHP MPs who simply haven't a clue what the implications of not voting for President Erdogan's AK party truly are. (Catastrophe for Turkey).

It would be truly democratic to ban them completely (especially as they are like the Nazis, despite being nothing like the Nazis) so that they can't mislead the public any longer, but excluding them from the airwaves would be a good start, and something a properly impartial media would and should do.

And, pace the BBC's John Simpson regarding the UK's EU referendum, Turkish media should provide "clear guidance about what to do" during public votes, to counter the "lies" of the likes of the CHP. The Turkish media certainly didn't give them clear enough guidance about the lies that were being told by the pro-democracy opposition. I suspect that if people had known the facts and had judged in a more balanced way the outcome would have been a bit different, yes. They let their viewers and listeners down.

So, yes, inspired by former BBC man Gavin Esler, I myself now finally see that democracy means stopping wrong-thinking people from being heard, including 'elected' MPs guilty of bad-thinking.

Like his BBC programme Dateline London in its heyday, a true democracy should carefully control the range of voices allowed and ensure that bad-thinking people are either marginalised or excluded.

And if we disagree and think he's a not as good a thinker as he believes himself to be, well, we should just shut the flip up and simply accept his proposed ban on anyone who thinks too differently from him on the subject dearest to his heart from the BBC's airwaves. Because, obviously, Gavin's a good-thinker.

I was looking at him speaking at a Change UK rally on my widescreen TV and I gazed up at his enormous face on my screen. Over ten years of blogging it has taken me to learn what kind of smile was hidden beneath Gavin's bright-eyed, biased TV persona. O cruel, needless misunderstanding! O stubborn, self-willed exile from the loving breast! Two wine-scented tears are at this very moment trickling down the sides of my nose. But it's all right, everything is all right, the struggle is finished. I've won the victory over myself. I love Gavin Esler.
Posted by Craig at 21:22