"At one point I put my hand up, like I was back at school" 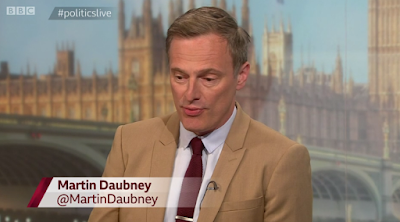 Now, there's a bit of 'history' (as they say) between Dan Hodges and the BBC's Rob Burley (responsible for Politics Live), so that might have been behind Dan's tweet here. But the Brexit Party's Martin Daubney joined in the subsequent exchange, and commented on his own experiences of appearing on the BBC - and such comments are always interesting:

Dan Hodges: Politics Live is basically turning into the political version of Jeremy Kyle.
Ed Mackrill: I stopped watching it after Jo Coburn and a panel of Remainers spent the entire show trying to get Martin Daubney to say something the Guardian could use for their next front cover the following day.
Martin Daubney: I've spent the past four years being the "token Leaver" on TV panels. You get used to that, but at least you get a say. But on Politics Live this week I could barely get a word in from 11.15-1pm... At one point I put my hand up, like I was back at school.