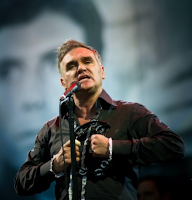 From the newly-retired open thread:

The BBC News website's report of that story began like this:

Poor Mozza really is out of favour at the BBC these days (not that he'll mind much I suspect).

Look at the language there: in summary, Morrissey "denies he is a racist" but has "previously expressed support for the far-right For Britain party".

(For Britain - for those who don't know - is Anne Marie Waters's party).

And later in the article the BBC informs us, "Morrissey, 60, has denied on multiple occasions he holds racist views." That's a lot of denial!