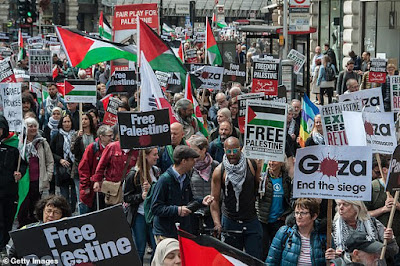 I know, I know, it’s the OMG Daily Mail, but I wonder if anyone else will pick up this story. BBC?


In a carefully worded statement issued this evening, the militant organisation, whose armed wing is responsible for the deaths of thousands of civilians, ‘saluted’ the Labour leader after he sent a message to a major anti-Israel rally in London last weekend.

That 'rally' was an Israel-bashing hatefest, starring Corbyn, Diane Abbott and Ahed “From the River To The Sea” Tamimi.

Hamas' statement in full:
‘We have received with great respect and appreciation the solidarity message sent by the British Labor Party Leader, Jeremy Corbyn, to the participants in the mass rally that took place in central London last Saturday in commemoration of the 71st anniversary of Nakba.

'In his message, Mr. Jeremy Corbyn condemned the Israeli occupation forces' shooting at unarmed Palestinian demonstrators in Gaza who were calling for their rights to be recognized. He stressed that peace cannot be achieved with the continued illegal occupation of the Palestinian territories.

'This message expresses support and solidarity with the Palestinian people and their inalienable rights to freedom, independence and self-determination. It also condemns the ongoing occupation and its crimes against our people, and reflects an advanced moral and political position worthy of all praise and thanks.

'We also salute Mr. Jeremy Corbyn for his principled position in rejecting the so-called Trump Plan for the Middle East or the "Deal of the Century" if it was based on erasing Palestinian rights, primarily the right to an independent state.

'On this occasion we emphasize that no peace plan can succeed at the expense of the rights of the Palestinian people, that the Palestinians will not allow this deal to pass, and that it will be doomed to failure.

'We also call on the current British government to stop supporting the Israeli occupation state and to listen to the voice of wisdom and reason and adopt policies in support of the Palestinian legitimate rights that will lead to stability in this vitally important and highly turbulent region.'