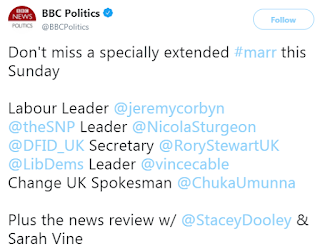 A large spattering of people objected to the near-absence of pro-Brexit voices.

Here's a selection of their objections:

Tim Montgomerie: Five main guests on the Marr programme in the weekend before the European elections and all five voted Remain. Well done BBC, you’ve outdone yourselves.
Martin Daubney: The weekend before the European Elections & BBC's Marr pulls out a full ticket of Remainers. Brexit not only broke politics, it's breaking our media.
Adrian Hilton: This is Marr's line-up for Sunday – the last weekend before Euro elections. You may spot a slight omission, or discern a very subtle inclination. Very subtle.
Leave.EU: Just days before the EU elections and THIS is the line up for tomorrow's Andrew Marr. BBC bias is never subtle but this as Remain as they come! A Trotskyist presenter welcomes an all-Remain panel on a public broadcaster propped up by funding from Brussels. One to miss!
Darren Grimes: Besides news review not a single guest on #Marr voted Brexit. Next week we go to polls to vote in European Elections that shouldn’t be taking place, three years on. Surely a Brexit-backing voice is relevant at this time? The BBC can barely mask its contempt for us at this point.
Guido Fawkes: In the Sunday before the Euro elections the BBC's flagship politics show plans to have representatives from all the parties apart from the one party topping the polls.

I was particularly struck by this thoughtful contribution though:

David Paxton: Not sure I’ve ever really done one of those bias BBC tweets. I’m getting fairly close to it here though. I’ll say this, I can see why Brexit types are scoffing at this. Rory Stewart, reluctantly, plugs the WA. Corbyn sort of half says he’s for the softest of Brexits but might sort of want a 2nd ref. The rest will do anything to revoke and forget. For a ‘special extended’ show it’s probably not great. Perhaps Marr wants to follow through on the Farage debate by just asking every major Remainer about their previous statements, presented in the worst light possible. But I have my doubts. They don’t choose which Tory I’m sure. The Tories do. So they’ve asked someone from each of those parties. And that tilts one way. All fairly explicable. Still though...

1.) For those asking: it’s a European Parliamentary election and we are legally obliged to represent the parties over the election period.
2.) Labour and Conservatives are both - as in 2017 - committed to delivering Brexit in some form. The Brexit Party were on the programme last week. UKIP have appeared previously in the period. Two out of three paper reviewers this week are advocates of Brexit.

You'll note, however, that the BBC Politics tweet he attached is different to the original one - the one that sparked all the controversy. It has an extra name: 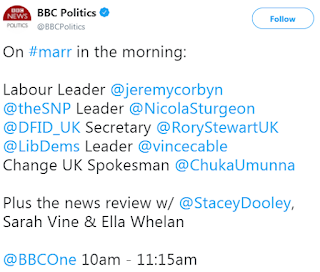 Yes, probably because of all the outrage, a second pro-Brexit paper reviewer had subsequently been invited - spiked's pro-The Brexit Party Ella Whelan - thus allowing John Neal to tweet that "Two out of three paper reviewers this week are advocates of Brexit". Before then the only pro-Brexit guest had been Sarah Vine. Hence all the complaints!

John Neal's boss, Rob Burley, then intervened (as you might expect!) to back him up and gave a reasonable explanation as to why no-one from The Brexit Party was on this week. The AM programme wanted Nigel Farage for today's show but NF preferred last week instead:

For those asking about Marr line up, see below. And just to add, Brexit Party were offered a slot this week but opted to go last week. We are, in a relatively short election period, balancing the political parties as we are required to do, as many critics of this actually know.

In reality, we asked the Brexit Party on this week but they preferred last. We can’t dictate when people are available.

What though about the politicians chosen from each party? Why not have a pro-Brexit Labour or Conservative guest instead of Jeremy Corbyn (yes, I know!) and Rory Stewart, to balance perspectives on Brexit as much as parties?

Well, Rob's point (which David Paxton, if hardly anyone else, pointed out) is that "critics ignore" the fact that it's the Government or Labour or whoever who "choose" who to put forward for a show during an election ("perhaps not the person you want/agree with on Brexit"). Rory Stewart was one because the Tories wanted him on and put him up for interview. Again, that sounds fair enough to me.

Rob Burley, obviously, can't convince everyone though and things have gone on (as such things do on Twitter). Let's eavesdrop on one exchange:

Tim Montgomerie: Crap. Almost every week - in and out of election periods - Marr is stacked with Remainers. We’ve been keeping count.
Rob Burley: This is a) uncharacteristically rude and b) based on  belief that we should count where people stand as in June 2016 not today. Accordingly, Theresa May would be counted as Remain because this accords with Tim's position. So count all you like but I question your methodology.

The 'Who do you characterise as a Remainer or a Brexiter in 2019?' question is one Rob returns to repeatedly, with good reason.

Obviously he's absolutely correct that it's not just as simple as saying that so-and-so voted Remain in 2016 so they should be counted as a Remainer now.

As David Paxton noted, yes, Nicola Sturgeon, Chuka Umunna and Sir Vince Cable are hardline Remainers but Jeremy Corbyn's position is evasive and self-contradictory (is he a soft-Brexiter, a half-hearted Remainer, or what?) and Rory Stewart positions himself as the softest of soft Brexiters these days. dutifully fulfilling the voters' decision.

But Tim is absolutely right to count. (I would say that, wouldn't I?). And what needs counting - especially outside election periods (which will invariably tend to skew things issue-wise) needs sharper definitions.

I'd describe those who don't want us to remain in the Single Market or the Customs Union as a distinct, easy-to-spot group whose appearances can easily be counted. Those who want to Revoke Article 50/annul the 2016 referendum result are just as easy to spot. Narrowing down the various in-betweeners wouldn't be that difficult and counting would then be fairly easy.

The BBC should count too and make sure that no group is under-represented.

Of course, given last week's highly controversial Nigel Farage interview from Andrew Marr, the other Big Question this week concerns the treatment of respective guests. Does that show bias?

What lots of people have been asking basically boils down to this: Would any of today's five Remainer/Remainerish AM interviewees be given the full 'gotcha' treatment that Nigel Farage received last week? Would any of them have a barrage of old quotes flung at them (quotes presented in the worst possible light) and little else?

I am, hopefully as ever, trying to be fair here. I think Andrew Marr asked uncomfortable questions to all of his guests. (Jeremy Corbyn fared particularly badly as a result, being snippy and evasive. And the line of questioning about how useless Change UK have been didn't get convincing answers from Chuka). His programme was, again, following a script, probably in pursuit of further would-be 'gotchas'.

Andrew could have played clip after clip after clip of Change UK people (Anna, Heidi, etc) making 'we must respect the voters' decision' remarks or quoted Chuka's infamous "trash" comments, and he could have quoted several dozen upon several dozen of Jeremy Corbyn's past comments to expose his far-left extremism and his strong inclination towards antisemitism and anti-Semites, or could have brought up terrorist Hamas's extraordinary 'thank you' to him this past week. But he didn't.

Everywhere behind these interviews lie strategies to pursue throughout the interview. 'Ask these questions. Pursue this particular angle'. Such strategies aren't inherently biased. They might just be 'the way to do it' appropriate to each interviewee. But they can easily fall prey to bias - far more easily than I think the BBC often appreciates.

Today's The Andrew Marr Show, I think, was seriously trying to fairly challenge each interviewee. But, I also think, that some interviewees are juicier targets than others, and that much more research goes into finding 'gotchas' to discredit them than others. The Nigel Farage interview was just one long stream of would-be 'gotchas'  - some given the worst possible interpretation, others factually wrong (as we noted).

If this post is full of shades of grey, then that's us. The BBC got some things right here and some things wrong. They made mistakes, but (stealthily) corrected one of them. They tried to give everyone the 'gotcha' treatment (in various ways), but gave Nigel Farage the most heavy-handed treatment of all, very possibly because they have deeper feelings about him.
Posted by Craig at 17:34