I was listening to the Today Programme this morning - I’m not quite sure what prompted this story, but at about 7:45 Yolande Knell started to recount a tale about the plight of cancer sufferers in Gaza, when the phone rang.

Who the hell phones you up for a non-emergency at that time of day? Better answer.  It was a damned robot speaking very fast on behalf of something I couldn’t quite catch, which sounded a bit like “Next” delivery, and without a pause it recited a long web address with a string of dots and forward- slashes and numbers - as if anyone could absorb all that code and type it all out on Google when they'd put the phone down and logged on.

On second thoughts it sounded more like NHS than Next, but I hung up. Also, the cat was furious because it hadn’t eaten all night and was absolutely starving.

Having answered the phone and fed the cat I returned to the radio, to hear the Labour MP Dr Rosena Allin-Khan telling listeners that “The Israeli Government are using healthcare restrictions to dehumanise the Palestinian people.”

I visited the West Bank and Jerusalem recently and spoke on @BBCR4Today about the cruel and inhumane permit system which means children in hospital can't be accompanied by their parents.
— Dr Rosena Allin-Khan (@DrRosena) May 31, 2019

Really you need to listen for yourself to properly understand the tenor of the item.  It seems that Israel is expected to show unreciprocated humanity to those who systematically dehumanise them at the risk of harming their own citizens. The complete absence of any basic context - eg., that Hamas is dedicated to the destruction of Israel by murdering individual Israelis and by any means it can devise, and that the PA operates a ‘pay for slay’ system.

When the deputy Israeli ambassador Sharon Bar-Li tried to explain about Hamas’s tendency to put explosives into medical ‘tubes’ Mishal Husain reverted to the notorious ‘how many Israelis’ manoeuvre. ”How many of these tubes have exploded? she demanded - impliedly arguing that the Israelis should have let a few slip through before they could justify tightening up the security.

I didn’t catch enough of this item to hear the particular reason it was being aired. Is this currently in the news, or was it simply a gratuitous reminder of the BBC’s anti-Israel activism? 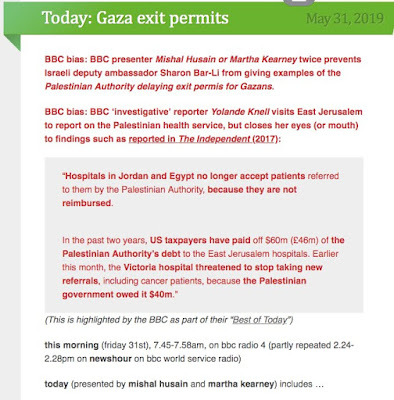