Just in case you haven’t noticed the update to my earlier post, I hereby reiterate that Islamic Jihad has admitted that it was responsible for the death of a pregnant woman and a baby. It occurred, not because of an Israeli airstrike, but because of one of its own missiles fell short.

To pre-empt the immediate response from usual suspects (that ‘it doesn’t matter anyway, because it’s the kind of thing that goes on all the time’ ) or, as the Guardian’s Michael White famously announced “Israel kills people a great deal",  this is not to say that no-one ever dies because of Israeli air strikes.  (Just to be clear, as the saying goes.)

It’s not surprising that the media swallowed the initial information from Hamas sources and regurgitated it lock, stock and barrel. That’s what the hostile-to-Israel media does. What is unusual was Islamic Jihad’s straightforward mea culpa, as well as the statement via Twitter (?) by the Gaza News Agency that lying doesn’t help their case. 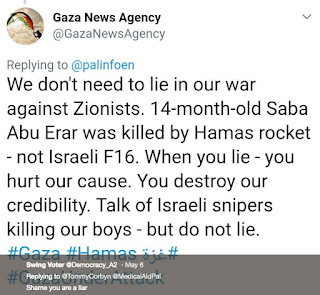 The same principle should apply to Tommy Corbyn, whose Tweets have been duly hammered by a barrage of outraged responses - and as far as I know, he has neither apologised nor deleted them. You’d think his dad would have advised him to listen to the wise advice from his friends from Gaza.

Meanwhile, the BBC sticks with its “Israel says” approach. Under the sub-heading “What do we know about casualties” they have:

“Israel has contested the account of the death of one woman and her 14-month-old niece on Saturday. They blamed their deaths on a Palestinian rocket that fell short of its target.” 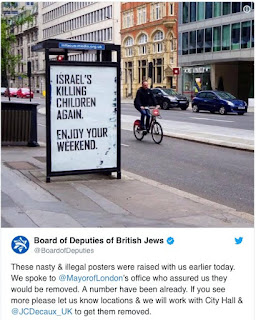