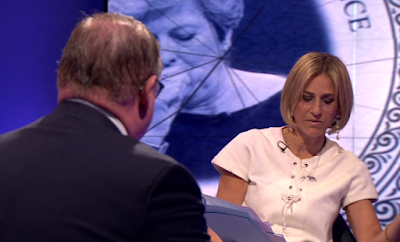 Following on from the previous post, and as MB outlines elsewhere, note how Emily Maitlis (on last night's Newsnight) misrepresents what Mark Francois said when she recalls the interview later in the programme. The early exchange went as follows:

Mark Francois: There is a slight difference which is, on the third meaningful vote, the crunch one, Steve still voted against the withdrawal agreement, as did I, and Boris and Dominic folded.

Emily Maitlis: So he's the purer...he's the pure one there? You wouldn't back somebody who folded?

Mark Francois: I would argue he was the more consistent.

As you'll see, it was Emily who brought in the words 'purer' and 'pure' with Mark Francois then refusing to use her form of words and choosing 'more consistent' instead. Yet later Emily said this:

When she took on that job, we were just discussing, we thought before the referendum that, you know, being a member of the EU or not was a technical choice. It was about negotiations and trade deals. And now it has become identity-defining. It's become about moral values, about the purity...we heard Mark Francois talking about whether Steve Baker was more pure than Boris Johnson. It has become so defining.

No we didn't Emily. We heard you taking about purity, not him.


And then Jenni Russell of the Times took up her misrepresentation and ran with it:

We are just about to get a lot further into the mire. We we watch Mark Francois just now talking about purity, you're back to issues of faith and identity and religion, and the people that I talk to have become so categoric about where they belong, either as Remainers or Leavers. It has caused all kinds of splits between families and between friends. I think these identities are running horribly deep.

MB's closing question surely gets to the crux of the matter here:

Re Maitlis - is it no longer important if a BBC presenter (a) knowingly lies about something saidabout 15 mins earlier or (b) is so incompetent that she forgets what a guest said on a matter of crucial national importance in direct response to her question just 15 mins earlier?