The BBC censors part of the story again

Germany's antisemitism commissioner Felix Klein has warned Jews not to wear skullcaps "everywhere all the time" because of the rising tide of anti-Jewish attacks in the country. He didn't specify what places and what times would be risky though.

This grim news is one of the lead stories on the BBC News website this morning: 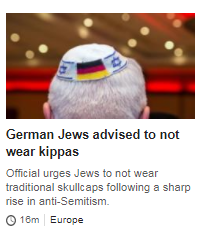 The BBC report focuses on the "rise in popularity of far-right groups" as the reason why antisemitism is on the rise, pointing the finger specifically at "the far-right Alternative for Germany (AfD)". 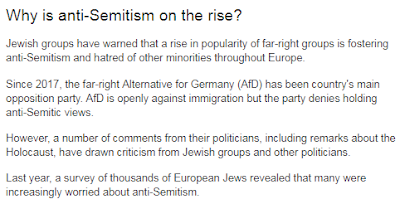 The BBC avoids, however, all mention of attacks on Jews by Muslims, despite a huge debate being sparked in the country last year after a 19-year-old Syrian asylum seeker attacked two yarmulke-wearing men in broad daylight in an attack seen as being antisemitic.

Other media outlets don't censor this part of the story. The Guardian, for example, has published a report (via Agence France-Presse) which says:

Klein said that while the far-right was to blame for the vast majority of antisemitic crime, it was apparent that some Muslims were also influenced by watching certain television channels “which transmit a dreadful image of Israel and Jews”.

How is it acceptable for the BBC to simply refuse to report this part of the story?
Posted by Craig at 06:46