"When Did You Stop Beating Your Wife?" 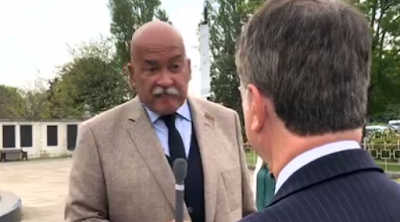 Another transcript for your delectation, this time from last night's News at Six and News at Ten on BBC One.

John Pienaar's report, however, regardless of its accuracy, was certainly 'unhelpful' to Ukip - to put it mildly.

As was John's choice of questions to put to Gerard Batten and broadcast on BBC One - especially the "And you find the idea of being a racist party, or extremist, offensive?" question. (A classic "When Did You Stop Beating Your Wife?" type of question).

After replying to it, Mr Batten brought the interview to an abrupt close.

And the vox pops, however representative they really were (and we viewers aren't able to know that), fell into the 'anti', 'don't know' and 'pro' camps, so were clearly 'balanced' - except that the young woman slamming Ukip for being 'racist' was firm and coherent, the 'don't know' man helped the Ukip/Brexit Party squabbles seem ridiculous. and the 'pro' man (a late middle-aged white man) was just quoted saying "Brilliant. A lot better than, er, what's, what's, what's running the country now, innit?", like something out of Little Britain.

And John's finally editorial banged the nails of irrelavance even further into the coffin he'd pre-prepared for Mr Batten's Ukip.

Newsreader: Ukip's leader Gerard Batten says his is the only political party that offers a clear policy to take the UK out of the European Union. As he launched Ukip's campaign for the European elections on 23rd May, Mr Batten said Brexit was being betrayed and a second referendum would mean the effective end of democracy. John Pienaar reports from Middlesborough:

John Pienaar: More than just a one-man band? Well, there's a new leader since Nigel Farage left to start a rival group - and Ukip's new themes at their European campaign launch? Much like the old ones, exactly what their target audience want to hear.

Gerard Batten: We're here because Brexit is being betrayed.

If playing the patriotic card guaranteed success, this would be a landslide for Gerard Batten's party.

Gerard Batten: Now, some of our more sensitive MPs don't like being called appeasers, collaborators, quislings and traitors. But if the cap fits, then wear it.

Ukip had 24 MEPs. Defections, desertions helped reduce them to four. Some called their party 'extremist'. Mr Batten called Islam a 'death cult' and took on a hugely controversial adviser.

Gerard Batten: This election isn't about Tommy Robinson, or anybody else who isn't a member of the party...John Pienaar: (interrupting) It is about your identity. Gerard Batten: This election is about the European elections and whether people want to remain in the European Union or leave, and what I've said to the crowd today, and you've heard it all, if they want to leave the European Union then Ukip is the authentic party of Leave. John Pienaar: And you find the idea of being a racist party, or extremist, offensive? Gerard Batten: You know very well that this party isn't racist. You know very well that I'm not. You know very well that Nigel Farage is saying things for political benefit, but I'm not frightened to speak out on things which I think are important and affect the future of this country. Thank you.

Ukip has a job of convincing to do with many voters:

Female Vox Pop 1: If you have racist policies, or policies that we would consider to be racist, then you're still a racist party.

The UK Independence Party will likely be weakened by the loss of Nigel Farage, whether they'll admit it or not. A figurehead, a symbol can mobilise a mood - of anger, of hope, of both. These elections will help determine whether Ukip can still gain from broken loyalties to the big parties, or whether they will be discarded and left behind. For a while, politics seemed almost easy for Ukip. Since the vote to leave, life's got much harder. John Pienaar, BBC News, Middlesbrough.
Posted by Craig at 16:26