For crying out loud! 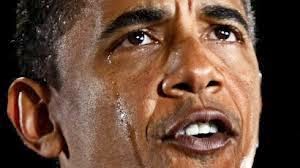 The closing item on today's Today probably wouldn't have appealed to Vladimir Putin, or to all those people at Biased BBC who accuse the BBC of deliberately undermining masculinity. It was a friendly plug for a new anthology of poems by Anthony and Ben Holden called Poems That Make Grown Men Cry.

Anthony Holden (or "Tony", as John Humphrys calls him) said that, unlike in the Elizabethan and Victorian eras (when men had hankies at the ready all the time), we men of today aren't supposed to cry. Crying is "out of fashion", he said, and he doesn't think it should be. He wants the rest of us to show more emotion too.

Based on Amazon's preview of the book in question (and as it's the weekend), I thought I'd prepare a little quiz for you. The quiz title is: Which poem makes which public figure cry like a little girl?

(1) Which of the following chose 'Of the Terrible Doubt of Appearances' by Walt Whitman?

OF the terrible doubt of appearances,/Of the uncertainty after all—that we may be deluded,/That may-be reliance and hope are but speculations after all, /That may-be identity beyond the grave is a beautiful fable only,/May-be the things I perceive...?

Now, did He really break the seal/And rise again? We dare not say;/But conscious unbelievers feel/Quite sure of Judgement Day./Meanwhile, a silence on the cross,/As dead as we shall ever be,/Speaks of some total gain or loss,/And you and I are free/To guess from the insulted face/Just what Appearances He saves/By suffering in a public place/A death reserved for slaves.

Was it (a) Rowan Williams, (b) Barry Humphries or (c) Robert Fisk?

(3) Which of the following chose 'Last Poems:XL' by A.E. Housman?

For nature, heartless, witless nature,/Will neither care nor know/What stranger's feet may find the meadow/And trespass there and go,/Nor ask amid the dews of morning/If they are mine or no.

Was it (a) Simon Schama, (b) Patrick Stewart or (c) Richard Dawkins?

The answers will be found in the comments field below.
Posted by Craig at 14:19