It's hard trying to be impartial, and slips are inevitable. We aren't machines after all and what we really think will sometimes get blurted out, however hard we try to keep our opinions to ourselves.

Poor Andrew Marr evidently doesn't have a high opinion of UKIP and UKIP supporters. He slipped up twice this morning and evidently couldn't help himself from outblurting his real thoughts about them. ("Outblurting"? Very Thomas Hardy that.)

First, as spotted by Biased BBC readers, Andrew Marr referred to a "cracking picture" of an odd looking chap in a blazer on the front page of The Observer 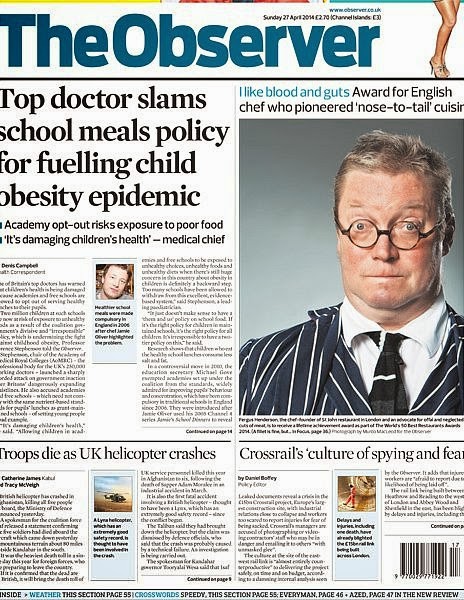 and quipped, "This looks like the ultimate UKIP supporter here!"

Then later, whilst interviewing Natalie Bennett of the Greens, he outblurted "Nigel Farridge" when mentioning the UKIP leader's name.

Pronouncing Nigel Farage's surname as "Farridge" is a popular sport among his less high-minded critics. You may have heard Radio 4 comedians mispronounce his name that way. Left-wingers on Twitter are always calling him "Farridge". A UKIP-baiting regular ('troll') at the Telegraph posted as "Niggle Farridge", complete with an unflattering photo of the UKIP leader as his avatar.

And yet here was Andrew Marr outblurting "Nigel Farridge" on his TV show today, as if calling him "Nigel Farridge" is something he's in the habit of doing off camera - which I suspect he does quite often.

If only the BBC worked to achieve a representative spread of political opinions among its presenters and then allowed its presenters to be open about what they really think, this sort of thing wouldn't keep happening.

That's something the BBC should really think about doing.
Posted by Craig at 19:56