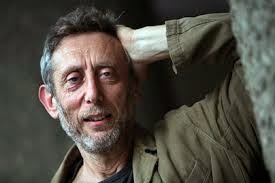 Radio 4's Word of Mouth, like Laurie Taylor's Thinking Allowed, is hosted by a man who's rarely afraid to express his strong left-wing beliefs - namely the children's author and socialist activist Michael Rosen.

As a result, it's hardly surprising to find those views reflected in Word of Mouth.

This week's edition, for example, which discussed 'Journalese', paused midway for a piece of Victorian journalism which, as I was listening to it, I guessed was by either Marx or Engels. We weren't told who wrote it though, so it probably wasn't by either of those illustrious figures.

It was an earnest attack on the way corporations oppress the poor that was interesting in itself but clearly intended, I believe, to prompt Michael Rosen's guests (and listeners) to draw the desired conclusions and reflect on the malign behaviour of big corporations today (which his guests obligingly did).

It's another case of 'just one of those things', isn't it? Just Michael Rosen being Michael Rosen. Like it or lump it.

He's penned (a poison pen letter) an open letter to the new culture secretary, Sajid Javid, in today's Guardian - a remarkably spiteful piece that's making much of the Guardian's own readership recoil in horror.

Dear Mr Javid,
We've never met, but that's because I work in "culture" and you have spent most of your adult life so far in banking.

No matter you are of working-class origin and your cultural background is a million miles from the Etonian toffs, you are now part of the class (yes) that runs the ludicrous world of the mega-rich gamblers who have caused millions of people across the world to lose their jobs and welfare.
So I'm not holding out any hopes.
Yours,
Michael Rosen

and it doesn't get much better in between.

It's not really surprising that Michael Rosen has never met a banker, even though he lives in London (where there are a lot of them about). He's safe inside his BBC/Guardian-sponsored ivory tower, protected from having to deal with mere tradesmen like them.

No connection between bankers and culture, eh? No Medici? No modern philanthropists? No T.S. Eliot?

Phlebas the Phoenician, a fortnight dead,
Forgot the cry of gulls, and the deep seas swell
And the profit and loss.
A current under sea
Picked his bones in whispers. As he rose and fell
He passed the stages of his age and youth
Entering the whirlpool.
Gentile or Jew
O you who turn the wheel and look to windward,
Consider Phlebas, who was once handsome and tall as you.

One of the guests on this week's Word of Mouth, Professor Robert Hutton, is the leading 'expert' in this field, having written a book called Romps, Tots and Boffins from which the following definitions are taken:


Acolytes - supporters of someone with whom we disagree.
Arcane rules - ones we can't be bothered to explain.
Draconian - the Government is proposing something with which we disagree.
Foul-mouthed tirade - someone has said a Bad Word. This event is always "extraordinary" or "astonishing" to newspapers, whose staff are well known for their delicate sensibilities.
Page-turner – compelling dross.
Rapped - In March 2013, several outlets including the BBC offered the headline: "Police chief rapped over Hillsborough", conjuring the image of some kind of appalling duet with Jay-Z.
Rushed - the only way anyone gets to hospital, typically after ambulances raced to the scene.
Tome – of course I haven’t read it.
Westminster source – the reporter at the desk next to me.
Westminster sources – the barman has heard it too.