“Have you enlisted Katty too?”

Oh, for David Preiser's take on this at Biased BBC (David is presently missing, presumed kidnapped. I suspect a police search of Mark Mardell's basement might restore him to us)...

Republican critics are aghast that he and his wife, writer Claire Shipman, photographed in their kitchen in Washingtonian Mom magazine, have been found to have decorated their walls with two 'two framed Soviet-era propaganda posters, one featuring a female factory worker and the other a Red Army soldier with the legend in Russian asking, “Have you enlisted?”'

According to The Times, "the simple explanation for the posters is that the couple both worked as award-winning journalists in Moscow during the collapse of the Soviet Union."

Still, it's got the American Right a-buzzing, and is (therefore) 'a story'. 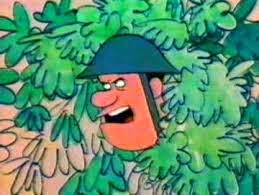 David P would be especially interested in this because one of the BBC's least impartial journalists, Katty Kay, who heads the BBC's American outfit, is - in one of  those strange BBC twists of circumstance - the business partner of Claire Shipman. (They've just published another book together, which The Times mentions - without mentioning Katty).

Were he not AWOL from Biased BBC, I'm sure that David would be checking the BBC News website to check out his suspicion that the BBC wouldn't be reporting this story. He'd find, not to his surprise, that they aren't reporting it.

He'd also be bound to be checking out Katty Kay's Twitter feed to see if she's keeping her gob shut - and, yep, she sure is , even though she's the top BBC presenter in the U.S. and knows Jay Carney very well, and knows Claire Shipman even better.

Of course, The Times is reporting it as if it's an out-of-season 'silly season' story. Which, in a sensible world, it would be.
Posted by Craig at 20:45