'Woman's Hour is not for me' 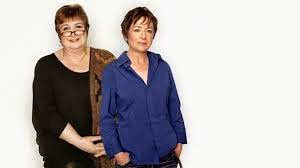 To mark the passing of Richard Hoggart, who was partial to a bit of poetry, I thought I'd express my feelings about a particular BBC programme in verse:


This  morning's edition of Woman's Hour had four items on its agenda, not one of which fired me with any great urge to listen to it: (1) some hand-wringing about the lack of racial diversity in children's books, (2) a call for men to take more responsibility for birth control 40 years after the pill first became freely available on the NHS, (3) the UK's first female press photographer and (4) whether tinned fruit and veg is as good as fresh fruit and veg [OK, that last item does sound slightly interesting.]

The programme's tendency towards Guardian-like hand-wringing and fondness for feminist agenda-pushing really isn't my sort of thing - give me Melvyn Bragg and a bunch of academics banging on about Strabo's Geographica any day! - but I also know that one (wo)man's meat is another (wo)man's poison and that many others (men included) will doubtless have enjoyed this edition of Woman's Hour from start to finish, given that it appears to have quite a large and loyal audience.

There is something a little odd though about Woman's Hour (h/t Alan at Biased BBC), isn't there?

As you well know BBC programmes are supposed to be impartial but I’m not sure if that can be said of Woman’s Hour, at least when it comes to feminism. Woman’s Hour is in fact a powerful advocate for women’s empowerment and this week as part of that campaign it produced its second power list.

Well, yes - and there's not much doubt about it either, is there?

Rather like Laurie Taylor's Thinking Allowed, BBC Radio 4's Woman's Hour seems to be allowed to float outside the BBC's guidelines on impartiality. It is free to campaign, to push a feminist agenda, to take sides, and no one seems to mind. Those who don't like it simply steer clear of it.

It is a bit strange though, don't you think, for a supposedly impartial public broadcaster, isn't it?
Posted by Craig at 23:28