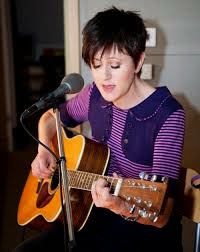 This morning's Today was a curious hybrid.

Guest-edited by ex-Everything But the Girl singer Tracey Thorn, part of the show seemed like business-as-usual Today, with stuff about the Middle East and cyber attacks, and a typically over-aggressive interview with a Tory minister from Jim Naughtie...

...but for much of the time, thanks to Tracey, it seemed as if Today had been taken over by Radio 1's Newsbeat.

Tracey chose subjects which (in her 52-year-old eyes) reflect the concern of young adults - subjects such as fanmail, whether the internet can help young gay people come to terms with their identity, whether young adult fiction is taken seriously enough, and whether children in care are made independent too soon or whether they should continue to be cared for until they are 21 (or 25).

I will admit that these aren't really subjects I usually give a great deal of thought to (as a 45-year-old man); after all, I don't send fanmail to famous people, I don't use the internet to come to terms with my sexual identity, I don't read young adult fiction, and (in the spirit of Bono) I've never (thank God) been in care.

So, as a result, I had to focus hard on what I was hearing in order to avoid drifting away - as hard as the proverbial supermodel faced with the word 'concentrate' on a bottle of orange squash.

I think it was worth the effort though, and I warmed a lot to Tracey Thorn.

(Yes, I know I should denounce her and all her works in true curmudgeonly blogger fashion, but I just can't bring myself to do it. Miracle on 34th Street, Nick Frost (the most Christmassy-named actor of all time) on Doctor Who, all the festive booze, perhaps...)

That said, I suspect Jim Naughtie's excessive belligerence towards Liz Truss MP wasn't just his natural anti-Right-wing bias coming out, more a case (at least for today) of him rebelling (however unconsciously) against all of Tracey's attempts to be positive and against her focus on the kinds of things that people like him and me (despite our divergent politics) find it so, so hard to relate to (for good or for ill).

And it was even worse for Jim. He had to listen to some pop music...

...a gorgeous new cover by Tracey Thorn (with her ex-EBTG husband Ben on piano) of a beautiful old B-side by Kate Bush, Under the Ivy.