Bishop Hill gets it right after all

Another strange one tonight relates to a piece today at Bishop Hill.

The tactics of the less reputable members of the environmental fraternity has long been to prevent any sort of industrial activity by making the cost of policing their protests so high as to wear public opinion into submission. One has to say that this approach has not been entirely unsuccessful.

It was interesting then to see the comments of Mr Justice Gilbart in rejecting FrackFree Balcombe's application for judicial review of West Sussex Council's decision to allow planning permission to the Cuadrilla project. There is a BBC report of the hearing here, but strangely the news of its rejection doesn't seem to have made the cut.

The implication here is of pro-environmentalist bias from the BBC.

Here's a screengrab of the BBC article linked to at Bishop Hill, date-stamped 6 November: 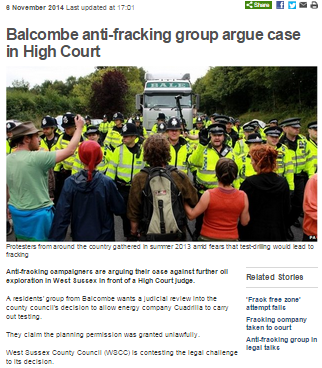 Now, this may seem to be just a simple case of an article being missed by a blogger, because - checking the BBC website - the BBC did actually report the rejection of FrackFree Balcombe's application three day's ago: 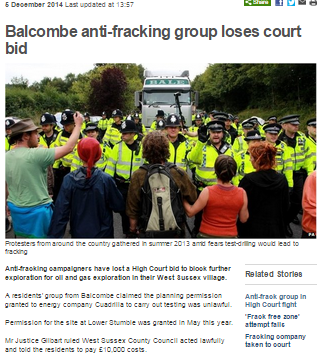 Bishop Hill quotes at some length from the judge's ruling and concludes:

This is utterly damning of the environmentalists' approach. You can see why the BBC would want to give it a miss.

And, guess what, the BBC did give that ruling "a miss"! Their account doesn't quote a single word of it. Not one word.

Instead, we get post-verdict reactions from Friends of the Earth spokeswoman Brenda Pollack and FrackFree Balcombe Residents Association (FFBRA) spokeswoman Sue Taylor, both moaning about the ruling, and a county council spokesman welcoming the ruling but 'reassuring residents' that no fracking had been proposed or approved - a sample I'd describe as showing a pronounced pro-environmentalist bias.

And as for the BBC article's three sub-headlines, well, they have to be seen to be believed:

Who wrote those? Caroline Lucas?

A case of BBC pro-environmentalist bias then? I'd say that's an undeniable 'yes'.
Posted by Craig at 20:21