Commenters at Biased BBC have picked up on a piece at Jihad Watch by Robert Spencer with the disturbing headline UK Labour Party: “UKIP has evil money grabbing jews in their party”, based on an earlier post by at the same blog by Pamela Geller. 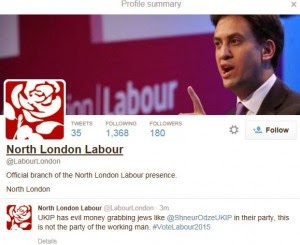 Labour is backpedaling furiously now, of course, and denying (in the teeth of abundant evidence to the contrary), that this appeared on an official Labour site. Their protestations notwithstanding, this illustrates the ugly antisemitism that increasingly pervades British society — not coincidentally, as the Muslim population is growing quickly and becoming more assertive. Labour assiduously courts those Muslim votes — hence this tweet.

The Biased BBC commenters wondered why the BBC wasn't making a big deal of such a disgusting tweet - the way they would if, say, a UKIP or Conservative politician had tweeted/said something so offensive...or even something far less offensive...

...and, yes, the BBC doesn't appear to have jumped on the story yet.

It looks, however, as if Jihad Watch may have jumped the gun here.

Investigating on Twitter this evening, it looks as if Labour's denials are correct. There is, apparently, no North London Labour, "official branch of the North London Labour presence" and @LabourLondon is just a reversal of the official Labour Party feed @LondonLabour.

The feed certainly looked convincing enough though to attract a lot of Labour Party followers (according to Jihad Watch), including Meg Hillier, Sadiq Khan and Dan Hodges.

The growing consensus is that it's a fake set up by a notorious hoaxer and neo-Nazi called Joshua Bonehill-Paine (whose antics have even resulted in a Wikipedia entry).

UKIP has also been plagued by fake accounts (such as “UKIP East London branch”). Several have been posting offensive tweets in the past weeks. The party believes that Joshua Bonehill is behind those too. (A new one sprung up just as the 'North London Labour' affair was unraveling called @UKIPLondonHQ before being quickly rumbled and suspended).

They too must have been as initially convincing as 'North London Labour', as they also attracted genuine UKIP followers at the start - presumably through a 'lure them in and then let them have it' strategy on the part of the hoaxer.

Given his past history of appearances on programmes like Newsnight, Mr Lewis might get this disgusting story onto the BBC after all.
Posted by Craig at 20:14