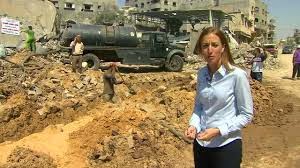 I'm no longer surprised at hearing about BBC presenters and reporters trading on names as BBC employees and engaging is a spot of moonlighting from time to time. Just as long as they take the money and don't say anything they shouldn't say (as prominent BBC representatives), that seem's fair enough to me - and admirably entrepreneurial of them too.

However, what if they take part in an event that promotes something that's highly controversial in their own field of reporting?

BBC Watch is raising the alarm about BBC Middle East reporter Yolande Knell's pre-Christmas chairing of a Q&A session at a promotional event for Palestinian director Leila Sansour's film Open Bethlehem in London - a film its admirers present as being anti-"occupation" and anti-security barrier.

What is Yolande Knell doing getting herself involved in the promotion of this controversial pro-Palestinian film?

As per the estimable Daphne Anson in the comments field at BBC Watch, a possible clue might be provided by Ms Sansour's Facebook page:

Another great evening at a packed Crouch End cinema. This time the Q&A was chaired by BBC Middle East correspondent Yolande Knell with whom I bonded three years ago over Yorkshire tea which had to be carefully rationed in Bethlehem as there were limited supplies of it in town- basically, her cupboard and mine. 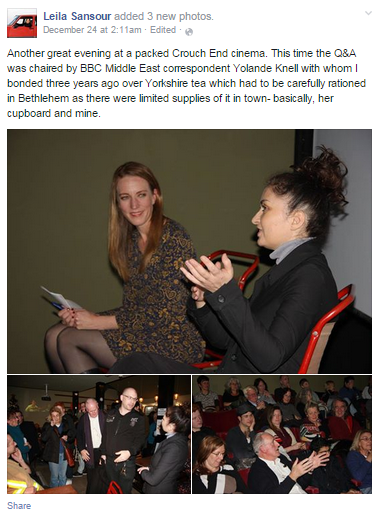 Also as per Daphne Anson (at her blog), Yolande has also been tweeting about the film too:

Now, we don't know what Yolande Knell said at the event. She may have remained studiously 'impartial' in her hosting of the event, or she may have behaved in a completely biased way.

Nevertheless, her mere presence at the promotion of such a partisan pro-Palestinian film is highly questionable, isn't it? And she does seem determined to give this film her seal of approval.

Doubtless BBC Watch and others will be referring the matter to the BBC to see if Yolande Knell has breached editorial guidelines here.


UPDATE: Sue has been Googling around and spotted some of Ms Sansour's Other Helpers. (As have I.)