I am neither an historian nor an expert on religion. In fact I am a secular non-believer. But, and it’s a big but, putting myself in the shoes of the average viewer/listener, I’m baffled about the media’s widespread lack of curiosity about the status quo vis a vis Jewish prayer rights at Jerusalem’s holiest place. To me it’s in the same bracket as the apparent universal acceptance of Mahmoud Abbas’s boast that any future Palestinian state will be entirely Jew-free in the light of a general willingness to accuse Israel of apartheid-ism, especially in regard to this prospective ‘Israel as a Jewish State’ law that’s causing such political turmoil.

So, in my ignorance, I’m wondering this: Since there is this long-standing ‘Muslim-only’ prayer scenario at what’s apparently the holiest place for Jews and the third holiest place for Islam, why should it appear so very surprising (and threatening) that certain religious Jews might want to question this. However, since the Israeli government has shown no sign that the ‘no prayers by Jews’ status quo is in any danger whatsoever, it seems equally surprising to me, as your average listener on the sofa, that any of this campaigning by religious Jews (to no avail) could be considered in any way, shape or form, an ‘attack’. But there it is.

(Out of curiosity I had a look at the “prayer” business, which is not at all straightforward - some religious Jews consider the physical site too holy to walk upon, so they wouldn’t be advocating any changes there even if Rabbi Glick’s campaign had been more successful.)

The reporting of the synagogue murders has been pretty awful. It has been examined in great detail over the last few days, and neatly summarised by Hadar at BBC Watch.

An even bigger mystery to me is why the BBC doesn’t report the incitement that is so blatantly going on by both Hamas and Fatah.

At a time when one after another Islam-related terror plot or Muslim grooming gang conviction is making our own UK headlines, something of the nature of the incompatibility of certain other cultures with our own is slowly seeping through, but still the fear of racism or the constraints of political correctness or something I don’t yet understand prevents the final leap  - eureka! - to the right conclusion.
One day everyone must surely see what’s behind the I/P conflict.

*******
Here’s something else I’d like to comment on. It’s a wistful piece by Marc Goldberg on Harry’s Place. It’s nothing much to do with the BBC. Well, perhaps indirectly.

He’s just got married and for some inexplicable reason ended his honeymoon back in the UK with a tour of the Harry Potter set.  (What?) Never mind. Different strokes.

“Is there anyone here from....?” asked the tour guide, who wanted to know how far and wide Harry Potterism had spread. People volunteered various countries.
The crux of the matter was - should they fess up - to the fact that they were from Israel? Why cause a situation?
The new wife was against. She knew. She didn’t want to have to be on the defensive on her honeymoon.
This is the thing. As the non religious progeny of vaguely non religious Jewish parents and the most assimilated person you could hope to meet, I do know one thing. Israel is the only place one could ever be freely ‘Jewish’ and be normal.
Not have to gird your loins. Not have to be on the defensive. Not have to be condescended to. Not have to be thought exotic. And I’m the most British person one could ever hope to patronise.

*******
After half watching several glowing obituary-like tributes to Gordo on the TV the other day from people like Peter Mandelson and Al Campbell, it was nice to see the different approaches in the Times. Daniel Finkelstein’s “Good riddance to Gordon the incredible sulk.” (£) and the other one “Gordon tried to sack me”.  It seems he was fond of trying to sack people.
I can’t help remembering from the old Biased-BBC days, how people were continually incensed by the BBC’s pro-Gordon attitude. In retrospect It all kind of seems more dangerous, the more we’re told. From the Fink:

“I used to think (I feel a little ashamed of this now) that my colleagues in the press were spending too much time chronicling the disputes between Tony Blair and Gordon Brown. Now I think perhaps we didn’t spend enough time on it.Reading the diaries and memoirs of the Blair years it is obvious that Mr. Brown’s impossible antics - which were worse than reported - had a serious and damaging impact on the governing of the country.. it prevented the prime minister from exercising proper control over his government, its spending and its reforms.” 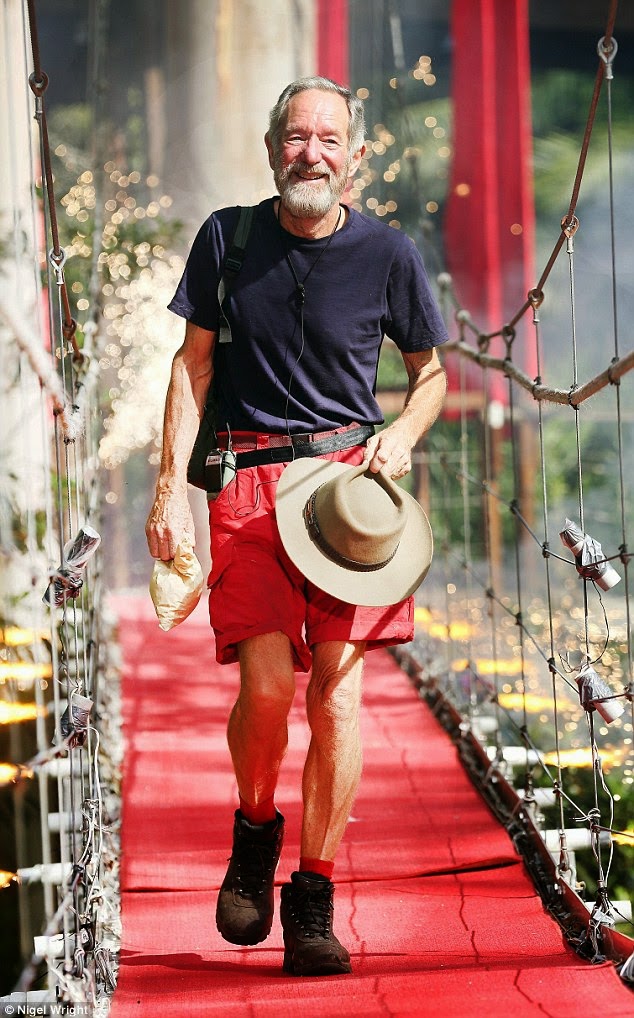 Did you see Michael Buerk on the BBC news channel?
He was voted off “I’m a celebrity” yesterday it seems. (You’ll have to ask Craig, he’s a fan.)
The anchor began interviewing him in a somewhat confrontational manner I thought. “Do you regret appearing in this?” “Was it a mistake? “ he asked, expecting, I thought, a defensive, defiant reply. Michael Buerk wasn’t at all defensive or defiant. He took the wind out of the BBC chap’s sails with such nicely expressed honesty that I was quite taken aback.
Does this, together with, say, Nigel Farage’s somewhat refreshing lack of politician-speak herald a new era of unspun straight talking  from unexpected quarters? Wouldn’t that be nice?

*******
Don’t you just hate the TV cliches that have taken hold with such repetitive predictability that they make programmes unwatchable? One of these is the annoying pause that has grown longer and longer before revealing who is ‘leaving us’? Is this televisual tension, suspense, heightened drama or just a gigantic pain in the neck?
*******

I forgot to watch the Apprentice last night so I’ll have to watch it on iPlayer I suppose, if I can be bothered. I haven’t warmed to any of the participants this time, and the format is becoming unbearably intrusive. What’s the point of the internal phone call to the ‘receptionist’? “Send the candidates in, please.” Do we need to see that every single time? The way Lord Sugar pronounces “Pleasse” is getting particularly annoying. The best thing he has ever said by way of a catchphrase is “With regret”.

“With regret” is something I might need to use myself. Must remember it.