Not bashing the Archbishop 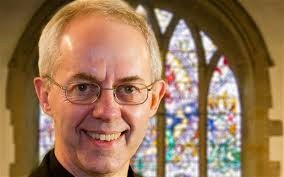 Though the colour scheme and layout of our blog may not change very much (which gives Sue cause for concern, as she's got much better visual taste than me and would very much like to improve its somewhat make-do-and-mend look), the second part of  the blog's title does vary from time to time.

As you may (or may not) have noticed, it now reads "...and any other matters that take our fancy", thus freeing us forever from having to peg every post to the theme of BBC bias and allowing us to bang on about any old random stuff that crosses our minds.

This post, therefore, will contain (a) a recipe for making lemonade, (b) a beginner's guide to Tantric Sex, and (c) the complete listings for ITV One for the next three months.

Actually, after he's been confirmed as suffering from pneumonia, this is going to be a must-read post about the Archbishop of Canterbury, Justin Welby, and his recent appearance on Desert Island Discs. ('Did you like that 'must-read'? As if!)

I like Justin Welby. He's the first A.B.of.C. I've ever really taken to and, despite my occasional fallings-out with him, I remain a fan.

(I feel a bit like George Herbert there: "I STRUCK the laptop and cried, “No more, Justin;/I'm getting bored./What, shall I ever sigh and whinge/About your comments about foodbanks?/But as I raved and grew more fierce and wild/At every word,/Methought I heard one calling "Craig, stop ranting",/And I replied, ‘Yeah, whatever!’")

He's a nice, bright-eyed archbishop - the Anglican Church's answer to his near namesake on Today, Justin Webb. (The two could easily be swapped). He's also quite wise, and highly likeable and well-intentioned. Plus, he wears his liturgical vestments well, and, surprisingly, believes in God.

He does the good old C of E proud, and though he doesn't denounce some of the things I'd really like him to denounce, I'll still forgive him.

The format of Desert Island Discs, as we've discussed here before, is infallible (something Archbishops of Canterbury have never claimed to be).

The choices of music were clearly those of a man who doesn't live and breathe music for music's sake (unlike myself). He admitted at the start that he's incapable of remembering music, however much he enjoys it, and  that he'd got a colleague to help him remember what he liked in order to choose his eight records. (That would never happen with me.)

The pieces chosen evoked family, his church career, places and events. His final choice of just one record to survive - a piece of (to my ears unremarkable) contemporary evangelical music - was characteristic.

Still, they managed to be very revealing. His first choice, In the Jungle (The Lion Sleeps Tonight), for example, reflects a family in-joke. When they play a highly competitive card game with others and they start losing, Justin begins singing. The aim is to put the others off. (Being competitive myself, I might well try that out when we next play Trivial Pursuit). Fancy, an A.B.of.C. engaging in one-upmanship! (Would Jesus have approved?)

We learned many other interesting things.

His parents had their wedding at 11 Downing Street, his mother's uncle being R.A.B. Butler. His mother had worked for Winston Churchill for six years and he himself remembers Winston as an old man. Winston cried, and he cried, then they had a cup of tea. His mother said Winston cried quite a lot.

His parents divorced when he was 3 years old. His father manufactured whisky for a while and aspired to be a Conservative politician (or "Tory politician", as Kirsty instinctively put it) but became an alcoholic - something Justin realised when he was around 12 years old. He recalled his father spending one Christmas Day in bed and himself staring out of the window, feeling hungry. "A grim, grim day", he called it. 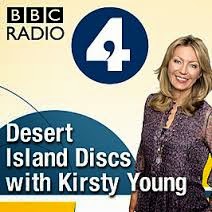 He attended Eton, where they went to church twice a day. He doesn't remember much about that, except the headmaster falling out of the pulpit. (He got caught in his own microphone and squawked slightly.)

He got a C in History, a D in English and and E in French, and yet still got into Trinity College, Cambridge. He's said he's still not quite sure how, but admitted he'd got a second chance - another exam (purely on History, his favourite subject), and knuckled down to pass it.

He loved Cambridge, and met his wife, Caroline, there. His moment of conversion came there too.

After leaving Cambridge, he took a job in the oil industry and lived in Paris.

In was in 1983, on his first day back in England, that his first-born daughter, Joanna, died, aged seven-months-old, in a car crash. (This was the most moving part of the programme. I came very close to tears at this point). Having talked to many, many others since, his advice on reaching the yearly anniversary of her death is: "Attack the day so that it won't attack you" - i.e. remember, commemorate.

In 1989, he left the oil industry and began a theology degree at Durham. Asked for his feelings about working in the oil industry, he said he enjoyed it. He was working with people he liked (which makes me like him even more).

He was Dean of Liverpool, and recalled the Hillsborough anniversaries (not that they talk about it much there). He described Liverpool as "this amazing, wonderful, poor, battered, thrusting, lively, humorous city".

As for the strange fact that he'd barely been a bishop for six months before becoming A.B.of.C, he said that he still feels as if he's not up to the task most of the time, describing that feeling as "imposter syndrome", and as for his faults he said, "I find it very easy to be lazy. I have a butterfly mind".

Kirsty Young did her thing. She's very good at it.

Of course, she's BBC through-and-through, so we got this kind of question from time to time:

Let's talk for a moment about same-sex marriage. You yourself have spoken against same-sex marriage. What do you think it is about homosexual relationships that should make them, in the Church's eyes, inferior, less equal, not open to the same opportunities that you afford all the other brethren?

Kirsty didn't, however, refrain from asking him the familiar, age-old questions, such as about what eternity is and why God allows suffering to happen.

Archbishop Justin didn't answer them to my satisfaction (as a atheist/would-be believer), sometimes taking the C of E's equivalent of the U.S. Fifth Amendment, sometimes moving into poetic, visionary language, sometimes just saying that we should focus on Christ, dying for us on the cross. However much I might like it to do so (and I really would like it to do so) and however much I might appreciate the effort, that sort of thing just cannot persuade me at the moment.

Finally, there was BBC connection in one of his musical choices - a piece written for his investiture as A.B.of.C. by Radio 3 Private Passions presenter Michael Berkeley. Private Passions is Radio 3's answer to Desert Island Discs. The piece, Listen, Listen, Oh my Child, has shades of John Tavener's popular The Lamb but with a very catchy, upbeat chorus.