I see Lucy Winkett has been quiet this year. No stunt to highlight Israel’s ‘apartheid wall’ . The plight of (non-Palestinian) Christians in the Middle East seems  to be concerning the media,   but apportioning the bulk of the blame to “ *Islamic State” (*not the real Islam) still leaves room for a goodly share of the blame to be directed at Israel for the convenience of the BBC-educated Israel-basher.

Mehdi Hasan has resurrected that tired old “analogy”: ‘What if Mary and Joseph tried to get to Bethlehem today?’  (answer: They’d get stuck at an Israeli checkpoint) 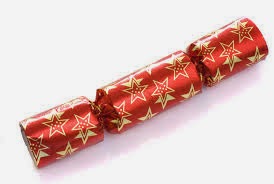 (Of course Mehdi is primarily famous for downright moonbattery, but occasionally he’ll come up with a smidgeon of sense, which puts one in mind of his friend Peter Oborne.
Mehdi is a poor man’s Peter Oborne. In a slightly different league, certainly, but parallel. In comparison with his overall output, Oborne’s antisemitic outbursts are few in number, whereas with Mehdi the reverse is the case - the posturing and childishness is the norm and episodes of wisdom are rare.  Of course Oborne’s ‘lapses’ (his obsession with the Jewish Lobby etc.) are all the more damaging, whereas whatever credibility Mehdi might have possessed fled with the grovelling letter to the Mail and the infamous cattle video.)

Much of the media stubbornly chooses not to attribute the persecution of Christians and other non Muslim faiths, including “lesser Muslims”, to the rise of political Islam throughout the Middle East. That would mean incriminating Islam, and would necessarily include Hamas and Fatah.    Instead they begrudgingly admit that the problem is associated with Islam, but solely confined to the not-the-real-Islam branch of Islam.

Oh well. The zeitgeist is so anti-Israel these days that the BBC’s anti-Israel attitude has become publicly acceptable. Yesterday’s dinner table fashion has obviously trickled down. Which brings us back to Knell.

Leila Sansour is a (half) Palestinian Catholic. I wonder what she made of the Pope’s platitudinous Christmas message. He condemned religious violence, (who wouldn’t?) and called for peace in the Middle East (ditto) 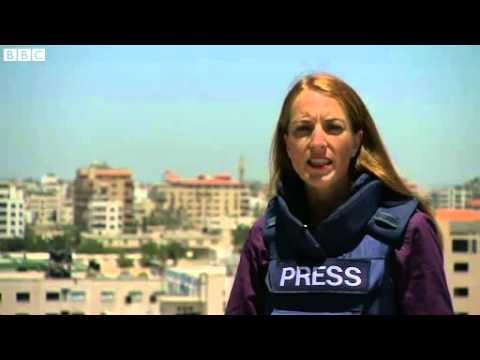 “It is essential that BBC staff, BBC correspondents on non staff contracts and freelances known to the public primarily as presenters or reporters on BBC news or current affairs programmes do not undertake any off-air activities which could undermine the BBC’s reputation for impartiality. Nothing they do or say should bring the BBC into disrepute. No off-air activity, including writing for newspapers, magazines or websites, writing books, giving interviews, making speeches or chairing conferences should lead to any doubt about the objectivity or integrity of their work for the BBC. If BBC journalists, presenters or reporters publicly express personal views off-air on controversial issues, then their editorial or on-air role may be severely compromised.”

Judging by the trailer for the film, it looks distinctly ‘cheesy’. My guess is that it’s a clunkingly sentimental collection of half-truths and  cinematic cliches. I haven’t seen the film of course so I may be wrong. Please don’t take my word for it. (As if!)

I might as well get all chummy and mention Daphne Anson’s post as well as Craig's. We’re all promoting each other, obviously, rather like Knell, Sansour, her hubby Nicholas Blincoe (former adviser to Nick Clegg) and the BBC’s own cutting edge wit and Middle East expert Jeremy Hardy.
(+ John Donnison and a few other BBC staff e.g. Rana Haddad.)

Bonding over cups of Yorkshire tea, Knell and Sansour chat about promoting Open Bethlehem, the film about Israel’s “asphyxiation of a little town with a world mission behind a wall that stands for all that is wrong.” 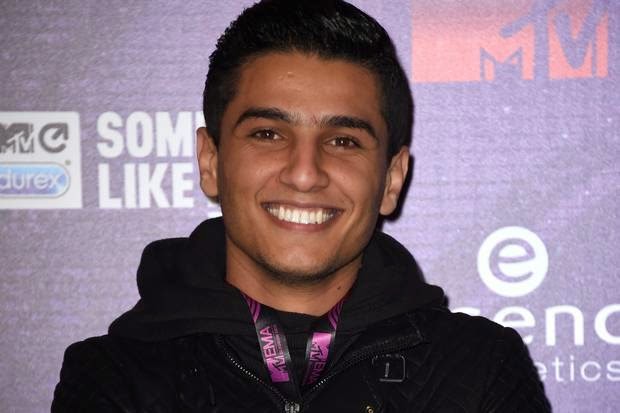 When not advising the deputy prime minister, hubby Nicholas devotes much of his time to various forms of anti-Israel activism. Meanwhile Jeremy Hardy is busy cracking hilarious jokes about the Jews on the BBC, starring in Sansour’s cutting edge political drama “Jeremy Hardy versus the Israeli Army” and hosting an informative Q.A. about Open Bethlehem.
Leila Sansour is furiously Tweeting about it all, and petitioning for an inquiry into the BBC’s pro-Israel bias. 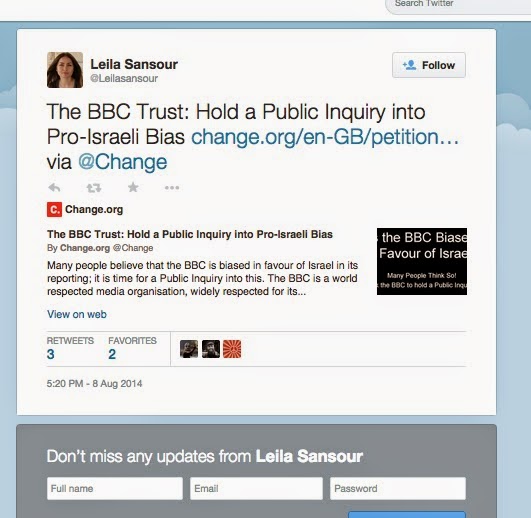 Good luck with that. If they ever hold such an inquiry, will they release it?
Another topic for a Q & A.