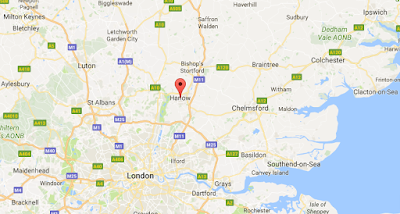 Here's an update on a sad story you may remember from last year...

In the months following the EU referendum a Polish man in Harlow, Arkadiusz Jozwik, was killed during an altercation with local youths.

It was a big story at the time and there was frenzied speculation in certain quarters that it was a 'hate crime' provoked by the Brexit vote.

Both DS and JS also vigorously tweeted about it at the time.

Newsnight's John Sweeney report was framed by Evan Davis saying, "Also tonight: a Polish man beaten to death in Essex, could it be the latest example of hate crime post-Brexit?".

John Sweeney himself asserted, "This is not an isolated experience. What happened here isn’t only a story of the ugly mood in our country post-Brexit. It’s also a story about antisocial behaviour, of people at night being afraid to walk down a British high street".

So, according to JS, it was a combination of the "ugly mood" post-Brexit and "antisocial behaviour" - a point he ended his point by repeating, saying "the fear is that two poisons have come together to a lethal result".

And those closing comments contained a particularly harsh charge - or, more accurately, a smear - against one particular UK party leader at the time. Here's how the interview ended:

ERIC HIND: (fragment of word, unclear) I don’t know if I can mention names but I mean . . .
JOHN SWEENEY:  Mention names!
ERIC HIND: But I mean, Nigel Farage, I mean, thank you for that, because you are part of this death, and you’ve got blood on your hands, thanks to you, thanks for all your decision, wherever you are, er...yeah, it’s your call.
JOHN SWEENEY: Nigel Farage has always denied this allegation. As the search for clues and answers continues, the fear is that two poisons have come together to a lethal result.

So what happened next? Well, the police, towards the end of last year, charged one youth with manslaughter and decided not to pursue the 'hate crime' charge.

I spotted at the time that both Daniel Sandford (the BBC reporter who reported for the BBC's main bulletins at the time) and John Sweeney (Newsnight's man) each put out a short, factual tweet about it (minus the 'not a hate crime' bit), neither adding any further comment, and neither in any way repenting of their reporting sins.

At the end of last month, the trial came to an end and the verdict was given. A boy was convicted of manslaughter and it's now clear that the fracas was a case of people drinking, youths cycling too close, an argument ensuing, a youth getting violent, a tragic death. Nothing to do with Brexit.

Now, I will admit that I didn't see the BBC online report about it, even though I check the BBC News website closely. But, yes, there was a report about it (albeit a brief one).

I only found it after specifically Googling to find it, after a tip-off from David Keighley at News-watch, and I suspect that the BBC never made it a prominent story last week.

The BBC online report fails to mention that it was widely - and wrongly - suspected of being a racist, Brexit-provoked hate crime at the time, and there's been no contrition from the BBC.

Curiously, neither Daniel Sandford nor John Sweeney have tweeted about the outcome of the trial, despite both of them making the initial incident a major story on the BBC.

Nor have they reported the outcome for the BBC.

In fact, they've both been silent on the story.

In fairness, checking his Twitter feed, Daniel may be on holiday as he's gone completely quiet.

Not so John Sweeney though. There's no such excuse for him.

He spent 31 July, the day of the verdict, tweeting away in a total frenzy. His concerns were Trump, Scaramucci, paintings he likes and animal videos, and he banged out scores and scores and scores and scores of tweets about them (as impartially as you'd expect - he says sarcastically) - but nothing, absolutely nothing, about the outcome of the trial for the 'hate crime' incident that he'd gone all sensationalist over for Newsnight last year.

And, as far as I can see, he didn't even notice the verdict. (Some BBC star reporter, eh?)

[Update: I hope she won't mind but I must share Sue's brilliant summation of John Sweeney's behaviour here: "Sweeney's indifference to the outcome of a story he had been so keen to Brexify".]

As for BBC TV - those BBC One news bulletins and Newsnight - which made so much of the story as a possible Brexit-related hate crime at the time - well, I've done thorough search after thorough search on TV Eyes (which picks up pretty much everything) and found nothing. Literally nothing. No follow-up reports on the BBC's News at Six and News at Ten. No follow-up segment on Newsnight. Nothing.

That raises serious questions: Why isn't the BBC setting the record straight here? And: Is it because it doesn't fit their narrative?

Well, I don't know but this is obviously either one of two things: It's either extremely shabby reporting or its extremely biased reporting. (Or both).

It's yet another sign that there's something deeply rotten in the state of the BBC.

News-watch pursued this energetically through the Cretan, Minotaur-filled BBC Complaints system and got lost in the BBC Complaints maze - a maze whose every dead-end features a large sign saying 'Not upheld'. I suspect they'll try again after this latest development.
Posted by Craig at 18:49