Further thoughts and an update

Following my earlier piece, Craig has reminded me that Amina Lone, like the majority of her co-religionists, is "actively pro-Palestinian" on Twitter. Quelle surprise, as they say.
No matter how outspoken a moderate Muslima may be in going public with her criticism of regressive cultural practices, she will still oppose Israel and Zionism. You can take the misogyny out of a moderate but you can’t take the antisemitism out of a Muslim. Or something.

Do look at Amina Lone’s Twitter feed for a minute.  Here she says the deselection “happened in June not because of any recent interviews”.
It just shows how misconceptions (lies?) jet round the world before the truth (whatever that is) has time to put its burka on.

Even if her deselection is genuinely nowt to do with Sarah Champion’s aborted criticism of Muslim grooming gangs, the perception that it is has been generally accepted as truthful.
The trouble is that, true or false, it has had  little impact on the Labour Party’s standing, just as all the rest of the appalling stuff that pours forth from team Corbyn is ignored or glossed over by the MSM.

Also via the same timeline, note this series of tweets about the eyebrow brigade from “uberfeminist” including several foul-mouthed and embittered tweets by Nadia Chan. I wonder why Peter Kosminsky didn't base one of his characters on Ms Chan? His drama would have gained in authenticity what it might have lost in empathy.


Here’s another P.S. This one is to Craig’s Andrew Norfolk scoop.

Click on the link to the paper review with Daisy McArthur and Tim Stanley. Did you spot Daisy McArthur’s immediate response to the story? She began with a preemptive caveat, presumably to head off the politically correct protests from her friends and colleagues that she assumed would be forthcoming.

The nub of the story is that this 5 year old little girl, you can see her picture on the front page there pixellated, has been placed, has gone into foster care taken away from her mother and has been placed um with a Muslim family who don’t speak English all the time at home and obviously you can see there in the picture wears a niquab or a burka.

Now the controversy is that people will immediately think this is pandering to you know racist views - why shouldn’t you have one ethnicity tor one religion fostering another? Of course when you come down to it, if the child can’t make herself understood or doesn’t speak the same language as this family, if the child’s not used to somebody having their face covered, I think that is a serious, serious problem.

No Daisy. The controversy is not that, and by the way, what are these racist views to which you allude, prey? Oh, you mean people who suffer from that terrible affliction, Islamophobia. 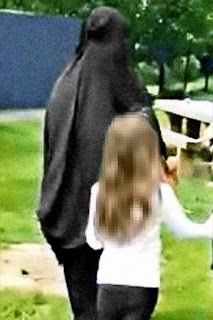 Yes, it might indeed be less controversial if families could foster within their own culture. Yes, cultural considerations might have to take a back seat when needs must, but why must we turn this particular case on its head to test our own outrage? Are we so afraid of being accused of hypocrisy?
Do we really need to defend our outrage at this scandalous scenario by bringing up the case of, say, the UKIP family who were allegedly denied the right to foster because of their politically incorrect values?   Whataboutery like that shouldn't even be necessary.

Please, what’s wrong with a bit of inconsistency in this case? Have we all forgotten? This is Britain for heaven’s sake, not Pakibloodystan.  Oh, I forgot; it was Tower Hamlets.