Well yes. Here's something I saw cited at B-BBC:

I assumed the B-BBC link would take me to a blog-post by someone like the ever-righteous Katty Kay or the ever-sarcastic Anthony Zurcher - BBC journalists who appear to have carte blanche to be as opinionated as they like (for some reason) despite that whole 'BBC impartiality' thing - but no, the link took me to a bog-standard, byline-free BBC report instead.

So even bog-standard, byline-free BBC reports about President Trump now read as if they are blog posts by opinionated BBC journalists.

(Ed - Shock horror! As if that's really something new!)

Those self-same BBC types have been going into a frenzied overdrive against Donald Trump after what the BBC's Laura Bicker (on BBC One's main news bulletin) called his "failure" to denounce white supremacists for yesterday's violence in Charlottesville.

I happen to agree with Laura there. I think it was a "failure" too.

That said, I'm entitled to express my opinions. I'm not a supposedly impartial BBC journalist. She is.

Yes, President Trump should have specifically slagged off the neo-Nazis, whilst acknowledging that, yes, the violence did initially come in roughly equal amounts from both sides until the neo-Nazi rammed his car into a crowd of protesters from the other side, killing a woman and injuring many more, of course - something which changed that equation considerably.

Slagging off people who bellow Nazi slogans ("Blood and soil"), give Nazi salutes (and yes they did give Nazi salutes!), spew antisemitic chants, march with torches, and tell black women to their face to 'go home' (complete with swear words), etc, is something a democrat ought to be happy to do - indeed consider it their duty to do (whilst simultaneously granting their right to free speech).

Back to the BBC though...

I'd challenge anyone who wishes to be considered fair-minded or objective to read any of the following Twitter feeds and then say that these BBC journalists are tweeting and re-tweeting as neutral, disinterested, purely objective reporters: Laura Bicker, Anthony Zurcher, Nick Bryant, Jon Sopel, Nick Robinson, Hugh Sykes, and Katty Kay.

Is this BBC groupthink in action? Of course, but shouldn't the BBC, which ought to promote democracy, be taking sides against neo-Nazis? Isn't it their duty to promote and protect democracy at the expense of totalitarians of all shades? So isn't this 'good' BBC groupthink?

Yes, of course, the hardcore 'antifa' types are deeply violent and have strong anti-democratic strains too, and it's significant (and predictable) that their violence, despite being much more pervasive, isn't dwelt on by the BBC anywhere near as much...

...but still Donald Trump should have distanced himself from the neo-Nazis - and questioning why he appeared to go all 'Jeremy Corbyn' by criticising violence from "all sides" (quite right actually) without adding that he personally abhors white supremacists (and any other shade of modern-day Nazi) and wants nothing to do with them, is surely appropriate questioning, isn't it?

Well yes, if it doesn't go beyond questioning into outright editorialising.

How fine a line is that?

As I wrote earlier, until a white supremacist terrorist, aping Europe's Muslim terrorists, repeatedly rammed his car into a crowd of protesters, killing a woman (Heather Heyer) and injuring many others, the equation of violence at yesterday's 'alt-right' rally in Charlottesville appears to have been fairly evenly spread between the fascists and the anti-fascists - both sides brawling, and clubbing each other, and chucking pepper spray.

A lot of the BBC's early reporting, from what I saw of it, acknowledged that in passing.

Only later did reports like Joel Gunter's begin appearing on the BBC website, painting a different picture of largely one-sided violence (from the violent far-right against peaceful anti-fascist protesters who, according to Joel, only threw bottles and chucked pepper spray).

And then came the terrorist attack from James Fields Jr. 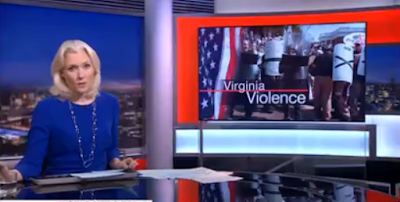 Joel was a candle in the wind. By this evening any sense that the 'antifa' crowd had any violent intentions has vanished - if the reporting I'm seeing on the BBC News Channel is anything to go by. And it was all Democrats (not that the BBC report itself declared any of them as such):

Newsreader: One of the organisers of Saturday's far-right rally in the U.S. city of Charlottesville that resulted in a woman being killed by a car has been forced to abandon a media briefing following protests. Meanwhile the White House defended President Trump after it was claimed he didn't go far enough in condemning violence by white supremacists. Our North America correspondent. Laura Bicker reports.
Laura Bicker: After a violent day of division, Charlottesville has come together to pray, to show that this city condemns the hate brought here by neo-Nazis and white supremacists. The Virginia governor went from row to row, hugging worshippers in this Baptist church. He promised to keep politics out of the pulpit, but there is a message he felt he had to give:
Terry McAuliffe, Governor of Virginia (Democrat): It is about politics in that the political rhetoric in this country today is breeding bigotry.
Laura Bicker: The streets here simmered with tension yesterday before finally erupting into violence, as white supremacists gathered for a rally. The group, which included members of the Klu Klux Klan, said they wanted to take America back. Counter-protesters and anti-racism activists challenged them. Police tried to disperse the crowd but this day was not to end peacefully. A car, at speed, rammed into protesters. Shocked witnesses captured the aftermath. The crash killed 32-year-old Heather Heyer, who'd fought racism all her adult life. Many others are still being treated in hospital. Those who captured the scene on camera said they were not shocked the day ended in tragedy. The police have charged a 20-year-old James Alex Fields Junior with second-degree murder.
Brennan Gilmore (former Democrat aide): The Nazis who came to town yesterday clearly had the intent of causing violence. You don't come to town with shields and helmets and weapons and have a militia with automatic or semiautomatic weapons around their shoulders if you are here to peacefully express an opinion.
Laura Bicker: Others, who have lived here all their lives, say the scenes do not represent Charlottesville, and they want politicians to challenge those responsible.
Dr. Wes Bellamy, Charlottesville deputy mayor (Democrat): It is important to call these people what they are - white supremacists. I don't understand why that is so difficult, that is what they are. They're not hiding this behind a statue, they didn't come here because of a statue, they came here because just as David Duke said yesterday, they came here to fulfil the promise of President Trump and take their country back.
Laura Bicker: This city did not want bigotry on its streets. Its people now want to remember those who died trying to challenge it and to keep the peace. Laura Bicker, BBC News.


(Is this a coherent post? Answers on a postcard to the comments thread below.)
Posted by Craig at 22:18