Has Andrew Norfolk exposed another scandal?

The Times has a disturbing report today by Andrew Norfolk about Tower Hamlets council placing a five-year-old white Christian girl in the care of two Muslim households in London.

The girl apparently became "very distressed" because in one of the households they "don't speak English", removed her necklace which had a Christian cross on it, suggested she learn Arabic, refused to allow her to eat her favourite food carbonara because it contained bacon, and taught her to think that "Christmas and Easter are stupid" and that "European women are stupid and alcoholic". Her first carer wore a niqab in public. Her second carer wears the full burka in public.

(Mr. Norfolk is, of course, the reporter who did so much to expose the Rotherham grooming scandal.)

It was good to see that last night's The Papers on the BBC News Channel led with the story, though with words of caution from BBC presenter Julian Worricker about the report's "claims". He presented the council's response and added this caveat:

Just to round this particular conversation off: Allegations there at the moment. Obviously we can't verify them at this point ourselves but we put them out there because there it is on the front page of the Times and we put the council's view.

Given the obvious importance of such a story it's to be hoped that the BBC will follow it up extensively, and not just because it's on the front page of the Times. It raises all manner of necessary questions.

Today has been covering it in their paper reviews too, with Justin Webb justly adding that Andrew Norfolk "has a very wide experience in these matters".

The BBC News website, so far, only features the story in its paper review and, unfortunately, that appears to show a decision being made by the BBC website not to give this Times report the greatest attention. The BBC's choice of featured headlines to illustrate their 'The Papers' article selects two other headlines instead: 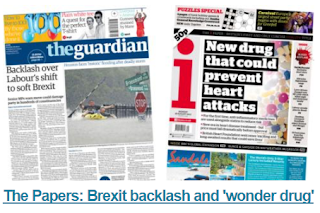 and the article's coverage of the Times's lead story comes next to last.

If the BBC were to run with this story it would force a national discussion on its many implications. Will the BBC choose to do so, or choose to play it down instead?
Posted by Craig at 08:21