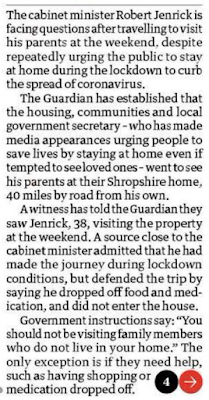 The Guardian's 'exclusive' yesterday that Robert Jenrick MP, Secretary of State for Housing, Communities & Local Government, "is facing questions" after visiting his elderly parents house is itself facing questions.

The Times's Matt Chorley responded to it by writing:

A story which doesn’t even survive four pars. There are plenty of people who would be in real trouble, including some of my own family, if relatives didn’t travel to leave food/medicine on the doorstep. Credit to Robert Jenrick for looking after his parents.

And the BBC's Andrew Neil commented:

This Guardian story kills itself by para four. So why publish at all?

Mr Jenrick himself tweeted this yesterday:

For clarity - my parents asked me to deliver some essentials - including medicines. They are both self-isolating due to age and my father's medical condition and I respected social distancing rules.

I think the even funnier thing is the Daily Mail trying to run the same story the next day and claiming it’s an exclusive.

The Daily Mail seems to think he shouldn't live with his wife and children if he works as a cabinet minister in London.
I first heard about the story while listening to Radio 3's Breakfast this morning. The usual intrusive, BBC-wide news bulletin at 8 o'clock ran the story like this:


Meanwhile, as the Government's again urged people to stay at home, a cabinet minister's had to defend his movements. The Daily Mail reports that Robert Jenrick went from London to his house in Herefordshire after Government guidance said that travel to second homes was not essential. In a statement the Communities Secretary said that he'd been in London on ministerial duties but left once he was able to work from his family home where his wife and children were.

I could be misunderstanding this story, but if Mr Jenrick's family lives in this 'second home' and he's an essential worker, why is it wrong that he travels back home to them? Surely that angle is just as untenable, as Mr Jenrick seems to have obeyed every one of the Government's own guidelines here.

Update: The title of the post has been amended. And I quite clearly was misunderstanding this story - see comments below.
Posted by Craig at 12:49

Labels: The Daily Mail, The Guardian