"You can see that when the difficult questions were asked on testing, things began to move"

New Labour leader Sir Keir Starmer says "scrutiny is important" to point out mistakes by the government "if they can then be put right"https://t.co/oZXAvYsmbG #Marr pic.twitter.com/WBs5BMRXlm
— BBC Politics (@BBCPolitics) April 5, 2020


Now that he has replaced Jeremy Corbyn,  various skeletons are emerging from Keir Starmer’s cupboard.

On Harry’s Place, there’s what appears to be a (slightly dodgy) anonymous text message alluding to his role in the Jimmy Savile ‘cover-up’ (Yes, they have misspelt “Kier”)

We might take that with a pinch of salt, but in the Evening Standard of January 2013, Starmer blames the police for the cock-up.

“Britain’s chief prosecutor apologised for the failure to pursue four separate allegations against the BBC star, one made as recently as four years ago.

Director of Public Prosecutions Keir Starmer said there were failures by police in Sussex and Surrey and by the principal lawyer in dealing with the allegations. He issued a personal apology for the mistakes by the Crown Prosecution Service and announced a series of changes to improve the investigation of allegations by child victims.

As Director of Public prosecutions, a few other regrettable decisions of the ‘uman rights kind have also been mentioned.

When Jeremy Corbyn was appointed Labour leader, admittedly it took them some time, but he was eventually held to account by the media for his past unsavoury indiscretions and associations.
When they’ve finished fawning over him, will the media be interested in the new leader’s track record?

Keir Starmer has apologised to the Jewish community and promised to root out antisemitism in the Labour Party.

As chair of Labour Friends of Palestine, Lisa Nandy has pledged to recognise Palestine as a State and advocate for the Right of Return for Palestinians (and their descendants) who were displaced or fled from the1948 ‘intended war of annihilation.’ 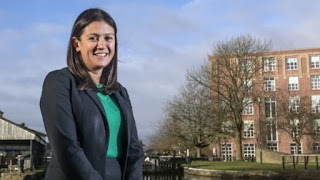 Can someone explain how Starmer intends to root out antisemitism when he has just appointed Lisa Nandy as the new Shadow Foreign Secretary?