We are not amused

I know it’s all wrong for someone who co-hosts a blog about BBC bias, but I confess I haven’t watched the BBC for quite some time. I gather Craig is going through a similar phase.

At mine, the family TV is nearly always tuned to other channels. Sky, despite the ads. Al-Jazeera, for some unknown reason. The Parliament Channel. Channel 4. The one exception is BBC 4. *This household can tolerate snippets of Katty Kay and Christian Fraser interspersed with Jon Sopel and - if I remember correctly, Gary O’Donoghue. *In short bursts. 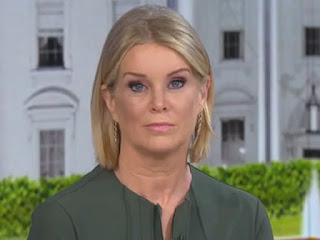 Katty Kay’s appearance is fascinating; eyes heavily eye-shadowed at the outer corners and those flared, flyaway eyebrows, I assume she’s trying to mimic a cat, as I guess one would if one went by the name of Katty. (What sort of name is that?) Miaow. Recently she’s gone for a more natural appearance and her hair even looks as though it could move. So, all good.

While I’m feeling catty, Jon Sopel still reminds me of Private Pike. It’s the wobbly head and the petulant, whiney voice. When he wears a scarf the resemblance is uncanny.

So, by way of fulfilling a strange sense of obligation, I decided to switch on HIGNFY last night to see if Labour’s catastrophic trouncing had made any impact on the ‘humour’. I have left-leaning friends who loyally tune in, week in, week out, in the hope that this time it might be entertaining. (The residual effect of the long-lost memory.)

What I saw was even worse than anyone could have thought possible. Beyond one’s wildest dreams awful. As the panel and the chairperson were self-isolating, they were filmed in their own homes. The panel members chose to be filmed in front of bookshelves laden with books, (Hislop had tomes, Merton had paperbacks) while Steph McGovern (chair) chose to pose in her kitchen.

A decorative frame (hideous) surrounded each animated vignette, underlining the separateness of the contributors while eliminating any potential camaraderie and bestowing a deadening effect upon the whole enterprise. As if it wasn't laboured and unfunny enough in the first place. Surprisingly, Helen Lewis seemed amused, as did the chairperson. I think the other one was Miles Jupp.

Or were those toothy grimaces actually signs of hysteria?
Posted by sue at 20:23