“Under his dull, dismal leadership, Labour has become a byword for animus against Jews and every strain of conspiracy theory that proceeds therefrom.” 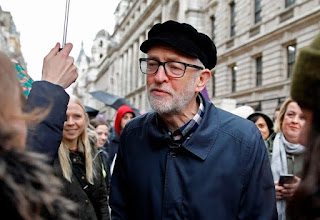 “Every Labour MP returned in December, every Labour activist who knocked on doors or delivered leaflets, knowingly tried to elect an antisemitic government out of sentimentality and tribalism.”

This taints the whole lot of them as far as I’m concerned. Including  Hilary Benn, Yvette Cooper, Liz Kendall, Uncle Tom Cobley and all.  Might as well throw in the contenders for the leadership and deputy leadership while I’m at it.

“Decorbynisation cannot be a trim job; the diseased roots must be hacked out. As well as reforming the complaints process along the lines proposed by Lisa Nandy, Labour will have to rid itself of the fallen redeemer and his sullen apostles. Expel him. Expel everyone who nominated him. Expel everyone who voted for him. Burn it down and salt the earth.”

I love that expression: ‘salt the earth’. It reminds me of “Quick! Get rid before it lays eggs” if you see what I mean.  Yup. Sanitise all the surfaces, wash your hands to two verses of The Red Flag and mind you don’t catch your keffiyeh in the door on the way out.

I have a long memory. Certain things, such as my longstanding awareness of Jeremy Corbyn’s petty-rebellious antisemitic antics are etched in the hard-wired department of my brain.

I well remember Corbyn, (alongside characters like Andy Slaughter, Paul Flynn, Grahame Morris and a clutch of Muslim Corbyistas like Zara Sultana lobbying furiously and viscerally against Israel and for “Palestine”, but I won’t be joining the anti-Corbyn brigade when they cite Sarah Champion as some kind of martyr for being demoted by the dear leader for (belatedly) naming and shaming the ‘Pakistani grooming gangs’ that had been operating in her constituency (Rotherham).

Some people regard the article in the Sun that got her into trouble with Corbyn as an ‘act of bravery’  - but it took her long enough to get round to writing about a crime that had been going on under her nose for some time and the true nature of the crime had already been pointed out by others as they expressed sympathy with the victims.

I’m afraid I well remember Ms Champion sitting at the head of the table presiding over a 99.9 % Asian council committee meeting castigating Israel with great gusto at the time of Israel’s 2014 incursion into Gaza. Where Ms Champion is concerned, I believe a large dollop of opportunism is involved as articles on this blog can testify.

On #R4Today some of the BBC's best known voices will offer their favourite poems of #comfortandhope.


“That was lovely,” said Nick Robinson, choking back emotion.

Part Four: "Palestine"
There’s no sport, due to the lockdown, but sports commentators are still in full swing, so Rob Bonnet interviews 10-year-old skateboarding whizz, Roxanna Howlett, from Exeter. Roxanne is a versatile skateboarder and she has travelled widely through her sport.

RB
"Well, I hear that you travel a lot with your skateboard. Where’ve you been” (as if he didn’t know)

RB
"Goodness me, you’re the best, well-travelled ten-year-old I think I've ever met. That’s fantastic! What about Palestine? What was that like?

RH
It was amazing, actually. It’s quite a poor country.

RB
What did you do there?

RH
We met up with the State Pal, they’re a charity and they help children from all around the world

RB
How much equipment did they have in Palestine?

Good to know Rob Bonnet has such a keen interest in …. “Palestine”.
Posted by sue at 16:23