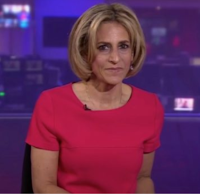 To while away a locked-down day blog favourite Alex Deane proposed a game yesterday:

Tweet an unfashionable opinion. I don’t mean one that you pretend is unfashionable but really makes you look “cool”. One that makes most people say NO. I’ll start. Most Bob Dylan covers are better than the originals.

Suggestions included "Wine doesn’t actually pair very well with food", "Two spaces after a full stop. Unfashionable, but correct" and "The Victorian Workhouse was an excellent idea. Feckless wastrels got a roof over their heads and three meals a day in return for gainful employment".

The undisputed winner, however, was:

I'm a big fan of the journalists asking questions at the daily press conference...They're doing a great job.

(Just between us, I think this canny chap was cheating by being sarcastic 😉)

Humour in a time of crisis:

The splendid Rich, who I also follow on Twitter, posted something the other day which others then swiped (without crediting him) and wrote close variations on:

This is how it'll play out if we make the vaccine:

BBC: Will you apologise for not creating it sooner?

ITV: Isn't it true that it contains dead kittens?

C4: Why didn't you join an EU vaccination scheme?

Sky: You said creating a vaccine would be difficult, do you now accept that you weren't telling the truth?

Buzzfeed: 37 reasons why the UK is still a shit country

Independent: Isn't it true that austerity stopped the vaccine being made sooner?

Then 12 days later, in what he thinks is a massive scoop, Robert Peston will tweet that his well-placed sources have informed him that a vaccine may be close.

Whether that's fair or not, something definitely gone badly wrong for the media during the coronavirus crisis - at least if Sky/YouGov's poll into public trust is anything to go by: 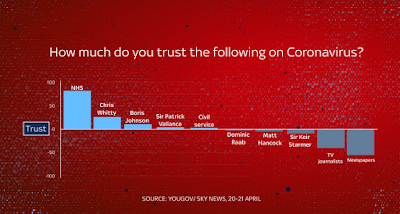 While the NHS has a +81 trust rating and Boris Johnson a +12 rating, TV journalists have a -40 rating and newspapers a -55 rating.

Newspapers have long had dreadful ratings, but for TV journalists to plummet to such dismals depths when it comes to public trust is highly striking, and ought to give them considerable pause for thought.

So why has the public drastically lost trust in TV journalists?

One possible factor is that the public has, by all accounts, seen a lot more of these TV journalists than usual - through watching the daily press conferences and by tuning in in greater numbers to BBC One's news bulletins, etc. (Even Newsnight cites a rise in viewing figures). Could it be that familiarity has bred contempt - and distrust?

Reading the non-bubble parts of Twitter, those daily press conferences do seem to be a particular bone of disquiet with the public. The likes of Laura Kuenssberg, Robert Peston, Beth Rigby, etc, now stand charged with all manner of things - including (to be brief): grandstanding, making fools of themselves, asking the same questions day after day, asking the same questions other journalists have asked before them (even during the same press conference), asking ill-informed questions, betraying scientific ignorance, being rude, asking the wrong questions, adopting a hostile tone, pushing an agenda, all singing from the same hymn sheet, failing to reflect or give voice to minority opinions (e.g. over the usefulness of lockdowns and the harmful economic effects of lockdowns), asking too many 'Will you apologise?' questions, being knee-jerk anti-government, and going for 'gotchas'. And, above all, of failing badly to catch the public mood.

Also: Could that anti-media stat have something to do with a swathe of the public reacting against swashbuckling, high-profile loudmouth Piers Morgan?

Or maybe it's because of people disliking aggressive, gotcha-style interviews by TV presenters/journalists? From Naga in the morning on BBC Breakfast to Emily in the evening on Newsnight, I'm seeing complaints along those lines chiming and rhyming with other complaints on my broad Twitter line. Such interruptions and gotchas are, understandably, winning our Naga and Emily & Co. vociferous plaudits from the tiny minority Twitter bubble and their media colleagues, but are they alienating/angering the vast public beyond that bubble?

And finally: Is more and more of the public starting to see such journalists as being little more than a vast ocean of agenda-pushers?

Whatever, it's still quite something when the public trusts the politicians more than they trust the journalists who believe themselves to be holding the politicians to account.
Posted by Craig at 20:52