Forgive me for going back to One Day in Gaza. I’m no Mastermind, but this topic covers both my specialist subjects.

1) The BBC’s bias against Israel,
2) The psychological manipulation of emotions through film.


This is also covered on David Collier’s blog, in the Jewish press and over on Harry’s Place, where Marc Goldberg focuses on the controversial translation of the (audio) “Yehud” to “Israeli”. 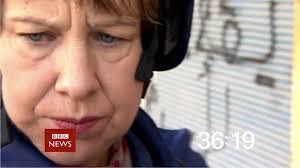 This is not the first time the BBC has sanctioned this translation. In Lyse Doucet’s Children of Gaza’ film,:

“Israel is massacring us” says a boy, according to the subtitles, but what we heard the boy actually saying was “yahud”  -  ‘Jews,’ not Israel.
Lyse was persuaded that when the people of Gaza say “yahud” they really mean Israelis; the truth is being disingenuously massaged to make the message more acceptable.

What did I mean?

Lyse defended this practice because she says that when Palestinians use the term “Yehud” they effectively mean “Israelis”.

Why is this even an issue?

Because it exposes the inherent Jew-hate behind the religion-based rejection of the Jewish state. It is, after all, enshrined in their holy book, and is the very thing that fuelled the original war against Israel, which according to the BBC “Broke Out” when Israel was established in 1948 The BBC is loath to confront even that, and even more loath to admit that Islam-rooted Jew-hate is the real obstacle to “peace” in the Middle East.

The Israel /Palestinian version of Gaslighting goes something like this:

That’s it. The mother of all Gaslighting.

Lyse Doucet was right. The waters have been well and truly muddied and the decidedly shaky claim that criticism of Israel - criticism of Israel’s policies - of its government etc., etc - is not antisemitic is thus cemented with just about enough shifty disingenuousness to set it off - hard and permanent.

I stand by my instinctive response to the psychological devices in the film, which I cited in my previous post. These are tell-tale signs of the BBC’s not so subtle anti-Jew approach. Their sentimental, quasi-romantic, emotional relationship with “the most hospitable people on earth” versus their Shylock, Fagin, Brian Sewell perception of the greedy Jew.

Epitomised by poignant portraits of traditionally dressed bereaved mothers, movingly, nay, heartrendingly filmed as they talk of their departed loved ones in the past tense, contrasted with the Israeli military spokesmen’s cold, dispassionate, hard-hearted rationalisation of the fog-of-war accident.

The filmmaker’s tacit innuendo appeared to be that these shootings were carried out ‘accidentally on purpose’,  accentuated by the “straight to camera” filming  technique with its distancing effect and its between-the-lines message, roughly, that the Palestinian ‘David’ (armed only with ramshackle, homemade slingshots) was (and always is) hopelessly pitted against a heavily armed ‘Goliath’ that delights in taking indiscriminate pot-shots at random women and children.

Of course, this has resonance with the current issue that the BBC mentioned this morning.

“The definition from the all-party parliamentary group on British Muslims is: “Islamophobia is rooted in racism and is a type of racism that targets expressions of Muslimness or perceived Muslimness.”

It’s a typical example of the drive to apply (false) equivalence to antisemitism and Islamophobia.

I very much doubt that the Labour Party’s antisemitism is connected in any way to their intimate knowledge of the Jewish religion. No, I’m afraid it’s simply “Jewishness” that offends them. In other words “It’s racism, stupid.”

Islamophobia, to coin a phrase, is largely based on the fear of the ideology of Islam, and “Muslimness" is one signal that the practitioner, or the wearer of the Islamic uniform, adheres to those principles.

Update:
For a detailed and substantive account of the film's bias, go the BBC Watch.

Here is a rather generous analysis of the film. The problem (as I see it) with Honest Reporting’s generosity is that the plus points he cites would resonate with open-minded audiences who happen to be viewing the film in an informed and objective environment.

But for the audience in Britain, hostile, ill-informed and already in no mood to empathise with Israel’s position, many viewers will have made their minds up already, and despite the film (at long last) acknowledging the violence, people believe it’s justified by “What Israel is doing to the Palestinians”.

As for the ‘gassing’, leaving the innuendo in the air, without any clarification was a grave misjudgement by the filmmakers.