If I could talk to the Taleban. Just imagine chatting to a terrorist in Pashto....

I've only just got round to watching this week's Dateline London, with Gavin Esler. (I've been on holiday, hunting haggis and listening to mutually-contradictory legends about Rob Roy MacGregor in Scotland.)

Things have proceeded as usual, such as Topic 1 - Afghanistan - seeing token right-winger Janet Daley of The Sunday Telegraph denouncing the bizarreness of the Obama administration's policy on Afghanistan ("I'm a president, get me out of here!")  and finding BBC presenter Gavin Esler immediately (reflex-ly?) turning to left-wing Arab writer Mustapha Karkouti and asking "I don't know how much of you buy [i.e. I don't agree with that] but, Mustapha, presumably it's worth talking to the Taleban, it's always been worth talking to the Taleban, and perhaps we'd have lost a lot of lives and treasure and so on if that had been engaged properly earlier" - which is as clear a crystallisation of what I've long thought to be the BBC's 'line' on Afghanistan as can be imagined. "Certainly, no doubt about that", replied Mr Karkouti, agreeing wholeheartedly with the BBC's Gavin Esler (as I would expect). "Talking to the Taleban would save lives, no doubt about that", he said. Count that then as yet another example of a BBC presenter being in synch with the sort of people I'm not in synch with. Being an old-style lefty Mustapha said the Qataris are 100% in agreement with the Americans. "Hmm", said Gavin of the BBC, as if it were true. The next guest, Catherine Mayer of Time (she of the infantalising haircut, as Sue once put it), said we should stop thinking of the Taleban as a single body and that what we're seeing is the emergence of one particular brand of the Taleban. She agreed with Janet that giving a date for withdrawal (i.e. by President Obama) was a mistake but she said there's been a violent pendulum of indecision going back and forth for ages, resulting in the disaster of Iraq and now becoming ever more febrile. Our terms of intervention, she said, remain undefined. Gavin chipped in a doubt about whether inventions are sellable in the U.S. now. The French left-winger Mark Roche, Dateline's most starry-eyed Europhile, then proved (again) his independence from the present British left-wing 'right-think' by extolling the virtues of the West's intervention in Afghanistan, and denouncing the Taleban as being the voice of "the Middle Ages". Catherine said, with Gavin's open backing, that you should make peace with your enemies not your friends. Talking to the Taleban is, therefore, good.

By Dateline's standards that was an unusually balanced discussion. Impartial BBC presenter Gavin's 'Talk to the Taleban' angle, however, was not hard to miss. 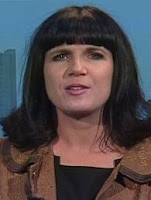 What of Edward Snowden, the leaker of America and Britain's intelligence secrets? 'A hero or a villain?', asked Gavin, oh-so-impartially. Catherine Mayer (above) talked of ambiguities, and was ambiguous herself. Marc Roche said it's essential that we have people like Mr Snowden. Janet Daley dismissed the question and and raised the issue of freedom v totalitarianism, saying it's shocking what Mr Snowden has revealed about what's going on, therefore (essentially) agreeing with M. Roche. Mustapha Karkouti, began by taking a somewhat different tack, saying we need to know what's going on, but later reverted to Marc and Janet's position that we do need to be involved in the work of the intelligence agencies more. Gavin intervened, to Janet's approval, to say there is no privacy. French left-winger Marc Roche then attacked French right-winger Nicolas Sarkozy for spying on Le Monde (ooh, that's his paper, don'tcha know). Catherine confessed to her earlier incoherence and affirmed that whistle-blowers are brave people. Gavin backed her up on that, saying he must have known what was coming but went ahead and did it anyway. Catherine agreed with Janet and Gavin that lots of unjustifiable land-grabs have been made by the security agencies and that there's not been a proper debate about what they ought to do. Gavin kept it up, asking Janet to agree that the various agencies are nudge-nudge-wink-winking to each other. Janet agreed. Marc Roche said  the security agencies are over-staffed and need supervision themselves. Methinks I can guess where Gavin's sympathies lie (with Mr Snowden). I'm not sure where mine lie. The discussion here was pretty consensual, and clearly on Mr Snowden's side - though I suspect Janet's unexpected involvement in this BBC-corralled  consensus might have quite a lot to do with her strong dislike of Barack Obama.

The final discussion concerned those bankers...yes, yet another discussion of bankers this week on the BBC (Broadcasting House raised very similar questions yesterday and PM had aired the issue last week. I've only listened to a very few BBC programmes but, Sunday excepted, that's a clean sweep of programmes discussing an issue that doesn't seem to be that topical). Fascinatingly -and going completely against my expectations - Marc Roche wanted the banks broken up but said that most bankers do a good job. Gavin Esler said "it [the government's new plan] does smack a bit of a show trial" against bankers. Catherine Mayer expressed "absolute contempt" for banker-bashers and banker-bashing. Janet Daley blamed Democratic politicians in the U.S. rather than bankers. Wow, a defence of bankers on the BBC!! Who would have expected that?!? Ah, thank goodness for traditional lefty Mustapha Karkouti for then restoring the natural order of things and saying that bankers control politicians and giving them a right good bashing. Then Catherine, to Marc's approval, said that getting more women into banking would help. Ah yes, phew, we're back on true BBC territory now! Marc wanted more "minorities" involved too.  Break up the banks, Marc said in conclusion. Aaahh, and relax - suddenly, the world makes sense again!
Posted by Craig at 20:13