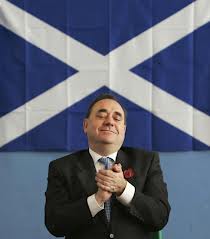 The head of the BBC's newsroom Mary Hockaday recently told Newswatch's Samira Ahmed, "We don't tell our reporters. We don't give them a sort of rule book for language". She said that in the wake of the Oxford grooming trial, when the BBC News at Six had been criticised by viewers for failing to use the word 'Muslim'.

As Sue pointed out a couple of days ago, however, the BBC certainly does have rule books for its reporters vis-à-vis language - such as its suggested language guide for coverage of Israel and the Palestinians.

Mary Hockaday's comment came back to me again as I was reading an article in The Scottish Sun which says:

BBC chiefs are to tell staff not to use words like “break-up” in their reports on independence — after complaints from Alex Salmond.


A guide will be issued to journalists after the corporation was accused of bias in its coverage of the 2014 poll.
Reporters will be told to cover the debate sensitively and avoid using terms favoured by Yes or No camps.
The climbdown follows talks between the First Minister and BBC chairman Lord Patten. A Beeb source said: “We will publish a guide that makes clear the need to use appropriate language to demonstrate we are impartial.

So there's another rule book regarding its reporters' use of language from the BBC!

Mr Salmond, the SNP and other 'Yes' campaigners for the 2014 independence referendum had objected to the way the BBC uses the words "separation" and "divorce" and the phrase "break-up of Britain".

The SNP have now welcomed the BBC's decision to discourage the use of such language.

The Scottish Sun notes, however, that SNP-favoured phrases like "a normal European state" and "Westminster government" are likely to be discouraged too.

As the BBC is charter-bound to be politically impartial, this seems to me to be a wholly creditable course of action on the BBC's part. I really can't see anything wrong with it. The corporation's reporters should be encouraged to think about how they're phrasing their reports before they speak or write for the BBC.

The risk, I guess, is that a measure of spontaneity is lost and, worse, that reporters could end up tangling themselves up in absurdity as they fumble around for les mots justes, desperately trying to avoid breaking the new rules on the spur of the moment. Presumably live on-air reporters will find it hardest. (Those who are biased will doubtless find it particularly hard!)

Some might object (if the Sun's report is fair) to the BBC's apparent caving in to SNP pressure, but the fact that the BBC seems to be working to ensure that biased language from both sides is avoided is surely a reasonable counter to that criticism.
Posted by Craig at 20:14