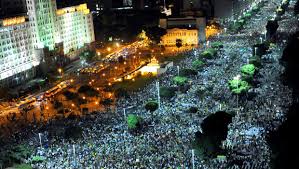 The Economist, I think, presents the most informative overview of the current protests in Brazil.

The protests started on June 6th in São Paulo over a rise in bus fares but these have now gone nationwide, turning into the biggest street demonstrations seen in the country since 1992.

The initial bus fare protests weren't universally popular, as many saw the protesters' demands as unreasonable and unaffordable. That changed on June 13th though when an ill-trained police force violently over-reacted to a mostly peaceful march. The popular reaction to his brutal police action went well beyond São Paulo.

As for the new, nationwide protests, "there were many more women, families and middle-aged folk than at the initial protests." The demands were many and varied - corruption, rising prices,  the cost of the World Cup (etc). The police were ordered to be stand back, unless violence erupted - thus reducing the mayhem.

The Economist article then pointed out the differences with those other countries where small protests have recently escalated into mass movements. Brazil, in contrast to those places, has record low youth unemployment, leaping living standards, hardly any immigration (etc), and those at the bottom of the social scale have gained most from economic growth.

"That has left commentators—and some marchers—struggling to explain why Brazil has taken to the streets", the Economist says.

"So why now?", the Economist asks. The world's eye being on the country because of the Confederations Cup? A recent spike in inflation?

President Dilma Rousseff is trying to position herself as being on the protesters' side. Her popularity remains high, there seem to be little party politics in the protests and the opposition is weak.

Nonetheless, her government has been put on notice. In the past decade 40m Brazilians have escaped absolute poverty. Most are still only one payday from disaster, and will fight tooth and nail not to fall back. They see further gains in living standards as a right. The marches are a sign that they are waking up to the fact that they pay taxes and deserve decent public services, not just shiny stadiums.

The BBC News website's take offers some interesting statistics. As the Economist notes, the initial protests in São Paulo featured a strong youth element - some 53% of them being under 25 - though that same stat shows that even in the early São Paulo protests 47% of the protesters were over 25. As the Economist also notes, the nationwide protests have swelled to include many more families and middle-aged people. Therefore, any attempts to paint the protests as being a Brazilian mass youth movement seem misguided. Given that the BBC's stats also show that only 24% of those polled say they are protesting "against politicians", any attempts to paint the protests as being against "the sham nature of democracy", "clique politics" and the "elite" seem premature too. Sweeping generalisations are, therefore, best avoided. 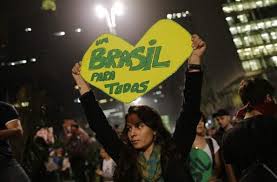 His latest article is far less informative than that of the Economist. Instead, he paints the protests in Brazil as being part of the global awakening of a disillusioned generation - "global youth" - using the tools of social media to fight the power. That's his one-size-fits-all narrative. It's the same narrative as found in his book Why It's Kicking Off Everywhere.

His analysis here is entirely in keeping with his recent reporting from Turkey, where he excised most of the complexities and contradictions found in the protests there in favour of an evocation of global revolt and the Paris Commune.

This tendency to simplify and generalise and to provide a grand, framing narrative emerged even more strongly in his report for Newsnight last night - an entirely typical Paul Mason piece complete with protesters battling police and two Laurie Penny-type attractive, young, female left-wing Brazilian activists as 'talking heads'. He even managed to use his "kicking off" catchphrase.

Yes, there may well be factors in common in some elements of the various large-scale protests taking place around the world, and some of the "core" protesters (as Paul would call them) may employ a shared symbolism (those Guy Fawkes masks, for example), but Paul really seems to be at risk of simplifying to such an extent that he misses out whole types of protester who don't fit in with his narrative (as also happened in Turkey), and of mistaking the "core" (his type of Occupy-type protester) for the voice of the mass protests in general, and of mistaking the often internally-incoherent mass protests for the (alleged) disillusion of an entire generation or social group, and of generalising so much that he downplays the local peculiarities of each country's protests and can't see the differences, and of projecting his romantic, left-wing revolutionary wish to see pretty young female activists leading an uprising of world youth against the capitalist system so much that he seems to keep getting it wrong, again and again - and Paul Mason certainly has form in getting in wrong.

Still, if you take a look at the comments beneath his blog, click on the 'Highest ratest' and read the praise for his piece, you will see that he strikes a warm chord with the Laurie Pennies of this world. The anti-capitalist, Occupy types just love his stuff - as well they might, given that it is so attune with their own views and panders so well to their own self-image.

Whether it amounts to accurate or unbiased reporting I very much doubt.
Posted by Craig at 10:13