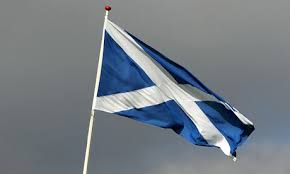 There's been something of a stramash (Scots, n an uproar; tumult; brawl) over this week's edition of Question Time from Edinburgh.

The panel consisted of Respect's George Galloway, UKIP's Nigel Farage, Scottish Conservative Ruth Davidson, Labour's Anas Sarwar, the SNP's Angus Robertson and journalist Lesley Riddoch. The audience consisted entirely of 16 and 17 year olds, following the decision to give them the vote for the 2014 independence referendum.

What of Lesley Riddoch? She's been sitting on the fence for some time, preferring 'devo-max' (an extension of devolution); however, she chose this edition of Question Time to climb down from the fence and declare herself to be a 'YES' supporter. Thus by the end of the programme the balance had swung back slightly - being 2 pro-independence and 4 anti-independence.

Haven't they been inevitable though? Question Time has to provide a spread of opinions from across the political spectrum and finding pro-independence Tories, Labour and Lib Dem panellists of stature is hardly going to be an easy task for the BBC. Moreover, even though all of those editions of the programme featured some discussion of the independence issue, none of them spent the majority of the programme on the issue. Many other non-independence issues were discussed. If those editions had been independence specials, then it would undeniably have been wrong to imbalance the panel against independence; but none of them were independence specials. If you ensure complete balance on the panel for one issue, what about all the others?

That said, the 2014 referendum is getting close and the BBC has obviously got to be much more careful - and get ever more careful with each and every broadcast from Scotland. Not knowing that Lesley Riddoch was going to come out for independence, the makers of the programme shouldn't have tilted it 4-1 against independence. That seems careless - and plain wrong. The annoyance of the SNP and other pro-independence groups is, therefore, understandable. The SNP's Kenneth Gibson has taken their complaint to the Scottish parliament.

That issue was only one of the complaints being made about this edition though. The other concerns the choice of representatives from UKIP and Respect, neither of which have representation in either Scotland's parliament or on Scotland's councils, and doing so at the expense of representatives from the Scottish Greens and Liberal Democrats, both of whom are electorally successful in Scotland. The Scottish Greens have already formally complained to the BBC about their exclusion.

Sour grapes on their part? Well, given that they say they've only appeared once in 14 years on Question Time's Scottish editions, they look to have a good case. Worse, there's a by-election next week in Aberdeen Donside where both the Lib Dems and Scottish Greens are standing. In the last election there, both parties were in the top five. The Representation of the People Act requires party political balance during elections. Wouldn't it apply during a Scottish parliamentary constituency election, or would that only apply to coverage of the by-election itself? I'm not sure. Still, that will hardly have improved the mood of the Scottish Lib Democrats and Greens and it doesn't smell right to me.

The problem for the nationalists is that Question Time is a programme that has to reach a UK-wide audience. Nigel Farage and George Galloway are big names and flamboyant performances. George has been on seven times since 2009 while Nigel has been on 14 times over the same period. Their parties may have precious little support in Scotland but they will pull in viewers from across the UK (especially England), and the BBC loves its ratings after all. With all due respect to them, Willie Rennie and Patrick Harvie are little known outside of Scotland and would not have the same pulling power.

So there's the dilemma for the BBC: Choice a panel for the Scottish edition of Question Time that fairly reflects Scottish public opinion and you could end up seeing English viewers rushing in droves to their OFF switches, or get in some exciting big names from parties with next to no relevance to Scottish voters but who will pull in the punters south of the border and get, as a result, a howl of protest from large numbers of aggrieved Scots.  Hmm, tricky.

I would say that they made a mistake having Nigel and George on this edition. Patrick and Willie would have been the 'right and proper' thing to do democratically-speaking. The stacking of panels against independence is going to have to stop too. The composition of this week's panel was wrong.

Incidentally, a tweet from Lesley Riddoch reveals something interesting about the audience (other than their age range:)

A perfectly balanced audience, eh?
Posted by Craig at 11:27