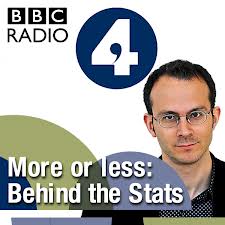 I do like BBC Radio 4's More or less, presented by the Financial Times writer Tim Harford.

This week's edition touched on the the widely-debated hospital Accident and Emergency statistics and began with a clip from a BBC news bulletin which said that waiting times in A&E have reached a nine-year high. Tim said that most of the reporting he'd heard looked "perfectly reasonable"; however, he clarified what is meant by the term "waiting time", which doesn't mean (as you might expect) the amount of time it takes for a medical professional to see you. No,

"The clock starts when you register at the desk and it stops when your case is resolved, which means you've been treated and discharged, or you've been admitted to the hospital."

He then played a clip of another claim being, this time by Today's Sarah Montague:

"There have never been so many people trying to use Accident and Emergency services in this country. Last year the number reached 21.7 million. That's up 50% in a decade."

More and Less's verdict on this?


"Now, this is true, but it doesn't mean that more and more people are going to traditional A&E hospital units. About ten years ago, the NHS developed lots of new walk-in clinics and minor injury units and from 2004 people presenting at those new units have been counted at having shown up at Accident and Emergency. The number of people accessing these types of services have increased over the last time years while the numbers attending traditional A&E units in hospitals has risen only very slightly."

A clear and concise summary of a vexatious political issue and one that might be seen to counter the line being put by the coalition government.

A case of pro-Labour bias, by judging against a coalition misuse of statistics? If so, what followed immediately cancelled that out. The programme played a clip of Labour's Andy Burnham complaining about 4,000 nurses being lost under the coalition. Tim pointed out, however, in advance of that clip that listeners out to beware:

"When you hear numbers about the NHS, just remember it's a pretty big organisation."

After the clip of the shadow secretary of state for health, Tim commented,

Then came something thoroughly admirable. Tim Harford reminded listeners of a feature on the previous edition of the programme that had mocked the Daily Telegraph for cocking up a couple of reports by getting its decimal points confused and, thus, wrongly magnifying the scale of the problems at hand by a factor of ten. He admitted that he'd got a little carried away" with the mockery of the Telegraph for its blunders, and gave us clips to back that up! Then came the thoroughly admirable bit: More or Less began mocking itself for making a decimal point error itself whilst mocking the Telegraph for making the same kind of error and, worse, by getting its maths even more wrong than Telegraph:

"O jealous statistical gods, how cruel you are! I was wrong. Very wrong. Wrong by a factor of a hundred. Now that's as wrong as two Daily Telegraph headlines multiplied together."

"This is embarrassing, given that we're a programme about getting the numbers right and doubly embarrassing because I was mocking the Daily Telegraph for a very similar error. Awkward!"

Now, that's what I'd expect from More and Less and Tim Harford were they ever to make a mistake - a swift, open and fulsome admission of their error followed by an apology.

If only the BBC Complaints department could be encouraged to follow their fine example!

The programme, incidentally, went on to demonstrate the difficulties of finding out anything out from the Office for National Statistics website, discuss the probability of conceiving three sets of identical twins and to debunk the myth that men think of sex every seven seconds. Fascinating stuff.
Posted by Craig at 20:00