An anti-science bias at 'Question Time'?

Further to Sue's post the other day regarding Russell Brand on Question Time....

Martin Robbins, The Lay Scientist at The Guardian, has published an interesting graph about the BBC's Question Time, based on analysis of all the guest appearances on the programme between May 2010 and June 2013: He titled his blog 'Everything that's wrong with BBC Question Time in one graph', although he did qualify that with "Okay, so perhaps not quite 'everything'" soon after!

(The two scientists, if you were wondering, were Lord Robert Winston and Colin Blakemore - both Labour Party supporters).

Martin's accompanying commentary is decidedly Guardianesque but a blog his article links to offers a less familiar perspective - and another interesting graph: 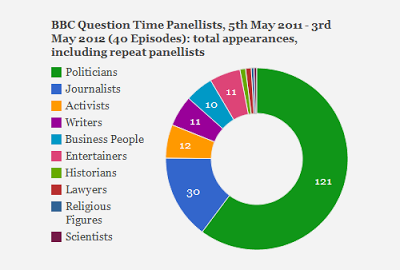 Callum Hackett is concerned about media apathy towards science and finds the BBC's Question Time to the a prime example of what's wrong:

Unfortunately, like so many other news sources on the screen and in print, Question Time indefensibly neglects scientific and academic opinion, while shamelessly promoting the opinions of popular entertainers, which are either equally or considerably less valuable on important matters of government policy.

Scientists account for a mere 0.5% of Question Time guests, averaging about one appearance per year.

Why might this be a problem? Here's Callum take:

I think this lack of a sensible, fair approach to programming is symptomatic of a larger problem that has infested the political system for some time. The UK government, for example, is largely occupied by career-politicians who have been involved with law, the media, or are arts graduates with little experience in other professions. Yet, for a complex, multi-faceted nation utterly dependent on science and technology to run successfully, we require a substantial number of scientists, engineers, academics, economists, doctors, and other well-educated professionals in parliament. Of course, we cannot fault the system if such people are not running for office, but we know all too well that political consultations with unelected representatives of these professions are often ignored in favour of party ideology.

The BBC, while maintaining a façade of openness and equality, is part of this problem, as is most of the media. On its prime political programme – hardly a show that attracts viewers looking for low-brow entertainment – they give regular voice to actors, singers, comedians, and TV personalities, but give hardly any time at all to the members of our society who shape the forefront of our collective knowledge and work on the technologies that may aid our economy and save our planet.

On this page, the BBC’s Deputy Head of Political Programmes in 2005, Ric Bailey, made it clear that one of their primary considerations is the tenor of debate: “The “non-party political” panellists primarily are chosen, we hope, to be lively and interesting and to add a different dimension of expertise or opinion.” There is a faint hope for the mention of “different dimensions” to give scope for inviting scientists or other under-represented figures, but the BBC has a clear bias towards ensuring “lively and interesting” debate by inviting people who more likely to be ideologues and closed to critical, empirical analysis. This is easily demonstrated given the fact that the political opinions of almost every panellist can be accurately predicted before they voice them on the basis of the party or newspaper or cause that they represent. Question Time is not a platform for considered debate where people use facts and reason to reach honest conclusions, it is a vehicle for publicising unconsidered opinions where the audience can agree with people who share they preconceived opinions without anyone actually changing their mind. It’s a sad state of affairs, but it’s just one depressing glimpse at a broken political system that infects wider culture – one that thrives on misinformation, under-education, and blind faith in party ideology.

I would certainly agree that scientists deserve greater representation on Question Time, and add that the audience deserve this too. Politicians and entertainers could quite easily shed a few spots to make space for them.
Posted by Craig at 21:29