Readers of this blog may recall the post BBC Correspondents Look Back...In Embarrassment where I was, as the programme's presenter Owen Bennett Jones was to jokingly put it a week later, somewhat "unkind" about four of the BBC best-known reporters and their powers of prediction.

The BBC reporter who came off worst was Paul Mason. All but one of his predictions for 2012 turned out to be wildly off the mark. I had some fun with all his disastrous predictions...plus the spectacularly wrong ones he'd made for 2011 and 2010. He didn't dare make any predictions for 2013!

This Marx-like inability to predict the future accurately wasn't, however, the most striking thing about his appearance on the New Year 2011/12 edition of BBC Correspondents Look Ahead; no, far more remarkable was the way he kept shoehorning his revolutionary fantasies into discussion after discussion. It descended into pure Wolfie Smith-style absurdity as the programme proceeded.

On the likely fate of the Assad regime in Syria, after all the other reporters had argued their cases sensibly enough, he leapt in to give listeners this "insight" about the Syrian conflict:

"There is this other elemental force, isn't there? People power!"

I didn't think much of that insight then, and I think even less of it now! For a top BBC reporter to say something so silly about the Syrian conflict beggars belief, doesn't it?

The following discussion of the "Arab Spring" was then interrupted by Paul's intervention to bring up the Occupy protests and predict "the urban poor" moving against the system in the United States during 2012 - another complete fantasy on his part!

Then his involvement in the discussion about the possibility of air strikes on Iran basically amounted to predictions of "the unrest of a generation" and an "uprising youth" in Iran during 2012 - which also turned out to be another figment of his revolutionary imagination.

Then there was his contribution to the discussion on the Middle East, which was to bang on about the "street protest movement" in Israel and insist "But it's not over" when, actually, it was!

He even predicted unrest in North Korea in 2012.

To quote my own mockery of "former" Trot Paul Mason's performance here:

Not in 2012 it didn't, Paul. And you're sound like a stuck record now. Power to the people! It's kicking off everywhere! Occupy, occupy, occupy!

I'm dredging this back up here because something of the revolutionary fantasist, so evident in this programme, is making itself felt in Paul's reporting from Turkey at the moment. 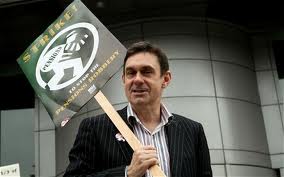 David Preiser at Biased BBC is firmly on Paul Mason's case over this, here and here.

David describes the BBC man as being "hungry for revolution", which is precisely how the offending article sounds to me too. Please have a read of it: Analysis: The hopes that blaze in Istanbul. It's quite something!

Paul gets very involved in drawing parallels between what's now happening in Turkey and the Paris Commune of 1871. The spectre of "Commune"ism is haunting Turkey apparently. He also brings in Occupy and the "Arab Spring". He finds left-wing nationalists (Ataturkists) and anti-globalist protesters ("Communists, anarchists, democrats"). What he doesn't find though are "the workers". It may be kicking off, but it ain't a revolution till the workers turn up, he says. As David Preiser puts it:

So it’s significantly larger than Occupy, but with broader support as with Tahrir Square, and “everyone” is there in Istanbul. Yet Mason says it’s all meaningless until the sainted “workers” show up.


The so-called “Arab Spring” didn’t start out as a workers’ rebellion, did it? His darling Occupiers were mostly not workers, either, and it’s pretty dishonest to act as if the Occupy movement was a workers’ rebellion of some sort. Is this the only prism through which Newsnight’s economics editor can see things?

I think it’s time we changed Mason’s job title from Newsnight economics editor to something more appropriate for what he does. Should we call him the BBC’s “It’s All Kicking Off” editor? BBC Revolution editor? 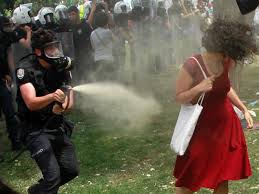 Now, does this article (echoing his Newsnight report, which is also featured in the online piece) really tell us more about Paul Mason's left-wing revolutionary fantasies than about impartial realities?

To test this out, I tried a spot of internet browsing, sampling at random a number of other articles featured prominently on Google News. Reading them has opened my eyes even further.

If, as I hope you have, you read Paul Mason's article, you may be a little taken aback at how different a picture these extracts paint to his:

Many of the young protestors admitted that they had little idea what they were protesting, though they joined in the cries calling on the government to resign. "We are here because we are bored," laughed Arlen, a high school student who, holding hands with her friends, looked on from a relatively safe point. Barkhan, a young man who was in the front line against the police chanting "shoulder to shoulder against fascism" offering a different perspective. "Of course we are protesting against police violence," he said, "but there is a ridiculous situation here when some of the guys here are using too much violence against the police."
Anshel Pfeffe, Ha'aretz

They belong, as perhaps does the woman in red, to the ranks of young, articulate women who believe they have something to lose in Erdogan's Turkey. They feel threatened by his promotion of the Islamic headscarf, symbol of female piety.


Many of the women point to new abortion laws as a sign that Erdogan, who has advised Turkish women to each have three children, wants to roll back women's rights and push them into traditional, pious roles.


"I respect women who wear the headscarf, that is their right, but İ also want my rights to be protected," says Esra. "I'm not a leftist or an anti-capitalist. İ want to be a business woman and live in a free Turkey."
Alexandra Hudson, Reuters

The protest was unusual in that it brought together young and old, the rightwing and leftists, and nationalist Turks and Kurds. They complained of issues beyond the planned shopping centre from government policy on the war in neighbouring Syria to new curbs on alcohol and a recent row about kissing in public.
Constanze Letsch, The Guardian

Aysegul Atesdagli, 25, a master's degree student at Istanbul University, had been at Taksim two nights before and couldn't go to work Saturday because she was sickened by the tear gas. "Right now, there's no right wing or left wing in Turkey, no religious or non-religious," she said. "I have seen some (religious) women in (head scarves) in the protests. It's beyond any ideology right now."
Rhonda Abrams, USA Today

This clearly isn't quite the left-wing "Occupy-movement-awaiting-the-workers" revolution that Paul Mason is presenting in his excitable article. It seems to be a lot more complicated than that. It seems, indeed, that Paul really is projecting his ready-made left-wing revolutionary fantasies onto a complex situation. Again.

Is that why all of Paul's late 2011 predictions of continuing street protests in Israel, of youth uprisings in Iran, of 'people power' in Syria and the rising up of the poor in American turned out to be so wide of the mark? Was he simply projecting his ready-made left-wing revolutionary fantasies onto those complex situations too and, as a result of this deeply biased starting, found that all of his predictions of revolution crumbled to dust?

Seriously, is this what we expect or want from a senior BBC reporter?

...and, less seriously, shouldn't the BBC take up David Preiser's suggestion and rename Newsnight's economics editor its It's All Kicking Off editor? I, for one, think it should.
Posted by Craig at 21:13