Women of the World Unite!

Paddy O'Connell had a simple message on this morning's Broadcasting House and, being Paddy, he pushed it pretty hard. He was (in true Paul Mason fashion) seeking to find commonalities between the protests in Brazil and those in Turkey:

Protesters seem to feel locked out of the political machine run by older people - mostly men - and social media helps spread the word.

He invited two young women from both countries to share their experiences.


And listening, Débora in Brazil, did you hear about Merve's protests in Turkey? Do you have a similar feeling, do you think?

And, Merve, did you see any similarities with life in Brazil?

Then he repeated his initial point:


So do you feel there's sort of a conspiracy of older men? Do the people who run your country, have they been taken by surprise? Do you think they know how to deal with you?

Listening to the women's respective grievances, I'd say they had strikingly different concerns despite the superficial similarities suggested by Paddy: One is protesting against an Islamising, socially conservative government agenda, the other against corruption and public waste in a socialist-led country.

As for the older men running their countries, I'd point out to Paddy that the older man who runs Brazil looks like this: 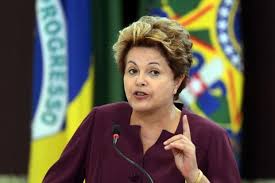