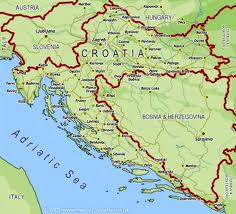 Several news outlets have printed an article by Darko Bandic and Dusan Stojanovic of the the Associated Press entitled Little joy in Croatia as it enters the EU.

The article says that support for EU membership is at 60%, which is not as high as might be expected. Ten years ago, when the country first sought entry to the EU that figure stood at 85%. Moreover, even that 60% figure masks the fact than only 49% of Croatians believe their country will gain benefit from membership. The reporters give voice to the fears of the 51% who don't share that optimism, though they balance that will more optimistic voices (albeit only cautious optimistism).

Fireworks will light up the skies over Zagreb and other Croatian towns as part of the celebrations, but for many of the country's 4.2 million inhabitants, membership of the EU has lost its sparkle.

The poll it quotes paints an even less enthusiastic picture:

Recent surveys show that support for Croatia's EU entry is now just above 50 percent, while only one of seven Croatians wants fireworks and concerts to celebrate EU membership.

The Daily Telegraph similarly reports on "the doubts and apprehension of many over the decision to become the bloc's 28th member, particularly at a time of deep economic and political tensions within the EU".

At a referendum in January last year, 66 per cent of votes cast were in favour - but as turnout was just 43 per cent, only a minority of Croats actually voted to join.

The latest polls show that less than half of Croats now favour joining the EU, with support at around 45 per cent.

I've been reading about this sort of thing for a few weeks now, so I was a little surprised to find the BBC's Kate Adie heralding a report from Mick Webb of (freelance writer for The Independent and former BBC editor) on this morning's From Our Own Correspondent with these words:

The European Union may not have had the best press in some member countries recently but in Croatia it seems there is enthusiasm at the prospect of joining the Euro club...Mick Webb tells us that Croatians are hoping that becoming part of the European family will help them deal with such matters as high unemployment and an economy languishing in recession.

...which, indeed, turned out to be the positive picture Mick Webb painted in his report of the feelings of Croatians towards membership of the EU, with a strong preponderance of hopeful voices being heard.

Now, I believe the BBC still has a problem with pro-EU bias and I think this is another piece of evidence for that. ("The European family" indeed!) FOOC seems more enthusiastic about the benefits of Croatia's EU membership than the Croatian people themselves.
Posted by Craig at 22:11

Labels: 'From Our Own Correspondent', kate Adie, pro-EU bias