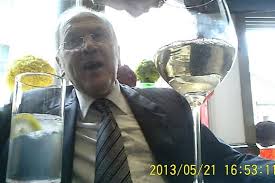 The latest parliamentary 'scandal', now embracing a Conservative MP, two Labour lords and an Ulster Unionist peer (all suspended/resigned from their parties now), has been exercising the media today. Stings by the BBC, the Telegraph and the Sunday Times have put parliament back under the glare of adverse publicity again.

Given the way things were going this morning, I was intrigued to hear how Paddy O'Connell's Broadcasting House would handle the issue. The Tory MP and the the UUP peer had already resigned from their parties by that stage, whilst the two Labour lords were still in place - though both were to be suspended by their party later in the day.

In my unreformed days (when Labour were last in power) I would regularly accuse Paddy (who I suspected of pro-Labour sympathies) of underplaying Labour Party scandals whilst accentuating Tory ones.

I'm not inclined to be as sure of myself as I used to be though, so this morning provided a good chance to test things out again. Would Paddy overplay the BBC/Telegraph story involving the Conservative MP and UUP peer whilst underplaying the Sunday Times story involving the two Labour lords and the UUP peer? That's the question I set myself before listening to today's Broadcasting House.

Here's how things panned out (as I see it).

The initial discussion between Paddy and BBC reporter Alan Soady aired all four cases, with Paddy's introduction listing all four parliamentarians, though only quoting the defence being made by one of them  - Labour's Lord Cunningham. Were I hunting bias, I'd chalk that down as one mark on the 'pro-Labour bias' side of the blackboard.

How long was spent on each parliamentarian's story? The more time each story was dwelt on the worse it would be for the parliamentarian concerned. Well, the UUP peer's case was discussed over 2 minutes and 18 seconds, the Conservative MP's case over 1 minute and 40 seconds, the first Labour lord's case over just 30 seconds and the second Labour lord's case over just 40 seconds. Were I hunting bias, I'd chalk that down as a third mark on the 'pro-Labour bias' side of the blackboard.

Hmm, and actually I think that's a primary colour here of difference that we'll discuss in a moment with the former watchdog, which is that in the case of Mr Mercer there WERE actions, even though he says they weren't motivated by the undercover team...there were actions...but in the case of the Sunday Times that we're doing, we don't yet see that there's been any actions taken in parliament. That seems to me to be a big difference.

Paddy then interviewed Sir Alistair Graham, the former parliamentary standards commissioner and immediately pursued the same line as he was making in that point to Alan Soady - the point that helps the Labour peers in particular and harms the Conservative MP most:

So I'm interesting in asking you, 'Should we differentiate between these two broad undercover teams?'

Hmm, and the key difference for all of us as voters is that he says correctly that you can take paid consultancy outside parliament and he will contest that there's a link between money and questions.

Then came the question where Paddy laid out the case he'd be pursuing throughout with crystal clarity - that distinction between the serious case of the Tory MP and the less serious cases of the Labour lords- by repeating the same question (in various forms) for the fourth time:

Let me ask you to this Sunday Times investigation, there's been no questions laid down in parl...in the Lords on this, so I'm wondering if you will agree with me that what's happening...what's reported in the Sunday Times is in a different category?

I'll mark all those questions down as one big final chalk mark on the 'pro-Labour bias' side of the blackboard.

By lunchtime, however, both of these 'relatively harmless' Labour peers had been suspended by their party. Labour clearly didn't share Paddy's generosity of spirit towards their position.