Why I bang on about 'Dateline' so much

I share the tendency of most politically-minded internet users to gravitate towards websites that reinforce my own point of view on most issues.

That said, I do force myself to read the others from time to time, in order to get a flavour of what they are thinking and why they are thinking it. Increasingly, I want to see if they could could be right and I could be wrong. I like to think I'm open to persuasion. More often than not, however, they aren't thinking what I'm thinking, they don't persuade me and I come away suspecting that I'm right after all (hurray!).

That said (again), I have to admit that I don't feel at home (so to speak) when visiting such sites, and...here's the point, germane to this blog....I get a surprisingly similar feeling of estranged curiosity whilst watching certain BBC programmes.

As regular readers will know (all too well, perhaps), Gavin Esler's Dateline London is one such programme.

The sense I get when I'm watching Dateline is that I'm witnessing a debate between the kind of people who write for the Guardian, the Independent, New Statesman, Liberal Conspiracy and the Electronic Intifada (less so Media Lens, perhaps). That sense is reinforced by the fact that many of them do write for these kinds of publication and far fewer write for the sort of publications I feel most comfortable with.

Moreover, I also get the feeling that those internet users who gravitate towards those left-liberal (or anti-Israel) sites find themselves much more at home watching Dateline; indeed, checking out the praise for the programme on Twitter over the last year has demonstrated (to my satisfaction) that this is indeed the case. The vast bulk of its fans are easy to identify as being  liberal or left-leaning. (Not that the programme's ever 'trends' much on Twitter!). The obvious questions arises: Why do left-liberals like Dateline?

Given that what I presume to be the initial concept behind Dateline - a free-flowing discussion between intelligent people across the world, from various political perspectives - is a noble one and (to out myself as a political geek) as close to my idea of TV heaven as possible, I feel I'm almost obliged to think that the programme can do much, much, much better than it's presently doing.

The elephant in the room here is that, as Dateline is a BBC programme, it shouldn't feel like a TV equivalent of the (non-licence-fee-funded) Guardian, Independent, New Statesman, Liberal Conspiracy and Electronic Intifada. It should strive for impartiality and give us a fair balance of opinions. Put plainly, it fails to do any such thing.

Today's edition, hosted by Gavin Esler, had a somewhat less obviously left-wing-biased panel than usual, even though three out of the four panellists are unquestionably left-liberal-leaning in orientation - namely Adam Raphael (formerly of the BBC and the Observer), Jef McAllister (formerly of Time, whose pro-Democrat, anti-Republican tendencies are undeniable) and Nesrine Malik (of the Guardian). The exception, though the political signals she sends never evinces much evidence that she's actually a right-winger, was the politically-cautious Chinese writer Diane Wei Liang (below).

The closing discussion on austerity and the EU was classic Dateline. Adam Raphael attacked austerity policies. As did Nesrine Malik. As, backing the Obama administration, did Jef McAllister. Diane Wei Liang cautiously dissented from the anti-austerity consensus and found herself being interrupted and challenged by the BBC presenter, Gavin Esler.

I really do feel conflicted about criticising Gavin Esler so often, and over so many years. He comes across as a decent human being, but his liberal biases have a habit of shining through more often than seems quite right for an impartial BBC presenter.

In this section of today's edition, however, he clearly sided with the anti-austerity side of the argument, even though the balance of the panel was already 3-1 against austerity. I can't see how that is right. Can you?

The discussion began with Adam Raphael rejecting the Economist's pro-austerity views, to general laughter. He expressed surprise at the quiescence of the European people in the face of austerity. Gavin interrupted to support him. Adam reaffirmed that this policy should stop now.

Gavin followed this assault on austerity policies by reinforcing that assault, posing an anti-austerity question to Diane:

It is interesting because, reading an American economist who was saying that people who are most in favour of austerity see debt as the biggest problem, but most people, if you ask them, are more worried about unemployment, not being able to put food on the table and whether there's going to be problems within their family just because they can't get work...is that how you see it?

Diane was worried about the consensus that the EU had reached the bottom of its problems and said that, despite her view that stimulus policies in America had provoked re-thoughts in Europe, "the judgement is still out there" on austerity - her line throughout being (a little like Zhou Enlai's view of the  impact of the French Revolution) that it's too early to tell. She added that you can't ask the German taxpayers to keep bailing out countries that have "run their economies into the ground"...which brought a challenging interruption, backing up the assault on 'austerity' from Adam Raphael, from the impartial BBC's Gavin Esler:

But you can't ask countries which have high unemployment to be able to pay off their debts because they simply can't afford to and they're in a vicious cycle [sic] is basically the core of Adam's argument, isn't it? It just doesn't work, for Greece for example?

Diane replied that "we don't know what works."

Adam interrupted to say that Germany's interest is to "keep Europe going". Diane gave in, but worried about the price.

Gavin, keeping along the same anti-austerity line, then put this question to Obamaphile Jef McAllister:

From the point of view of the Obama administration, this is Europe going through Keynsianism for slow learners [laughter from the left-liberal panellists]; in other words, they just got it wrong!

Jef praised the effects of Obama stimulus, though he said it wasn't as big as it should have been, and mocked Europe in comparison (without interruption from Gavin Esler).

Nesrine said it's "far simpler", it's about the terrible effects of austerity. (Boo Sarkoky! Boo austerity! - and no interruption from Gavin Esler).

Gavin, at that point, decided to "leave it there", despite having hosted a highly-skewed discussion on a hot political issue.

The earlier discussion on today's edition dealt with the Syrian issue and found Gavin Esler, for some reason, framing the discussion around Israel and its "willingness" to  bomb Syria "when the Israeli government thinks necessary", and, following immediately on from this point (and as if inviting blame for Israel for the possibility), "Are we in danger of seeing a civil war become a regional conflict?"

Gavin began by putting a point critical of the West to Nesrine of the Guardian, "....cos in a way, it's posturing, isn't it?" 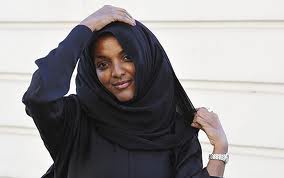 Nesrine of the Guardian (above) immediately launched into an attack on anyone concerned about Israel, especially the Americans, whose foreign policy in the region is, she said, "pivoted" around Israel. She doesn't "get" it. Israel is "a diversion", she asserted (at some length). Israel, Israel, Israel.

Adam Raphael denied this, saying in response "I don't think he [John Kerry] can regard Israel as a diversion". Unfortunately that's all he said - literally - before changing tack towards Russia. Let's "acknowledge Russian interests", said the former BBC Newsnight presenter/editor before stating his opposition to the giving of arms by the West to the Syrian rebels. Russia, Russia, Russia.

Gavin Esler complained about the Iraq War and the present state of Iraq in his question to Jef McAllister. Jef agreed and went along with Adam's line, backing the Obama administration's approach (as he would). Gavin invited him to dismiss Senator John McCain, which he duly did.

Nesrine intervened to make the bog standard left-wing Guardian complaint that the US won't intervene in Syria because there's "no interest" for them there, immediately spelled out by the BBC's Gavin Esler, "Because there's no oil". Nesrine and Gavin then re-entwined each others points to back this up.

Adam Raphael, in true former BBC mode, then launched into an appeal for the United Nations.

Unusually, I didn't disagree with some of the points being made. The Syrian conflict has got everyone, across the political spectrum, divided into a myriad, often conflicting (and self-conflicted) positions. Even the habitual consensus of a Dateline panel can't quite cope with its contradictions.

As I hope you can see, the discussion here was an interesting one. There wasn't a great deal of disagreement though. This is too often the case on Dateline.

I suppose my message is: Away with cosy liberal consensuses on Dateline - even if they are right! In with polite, intelligent disagreement between people from opposing sides of the political spectrum plus the odd in-betweener. Let the viewer decide.
Posted by Craig at 21:10