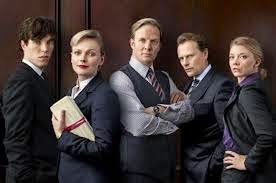 Not being someone who watches BBC dramas very often, I really don't have much to say about them. Tim Montgomerie of the Times, on the other hand, seems  watch quite a view of them and has plenty to say about them:

I understand guidelines on drama output will come under intense scrutiny next year when the BBC charter is due for renewal. Leading Tory ministers know that a nation’s long-term values are forged in drama, documentaries and comedy. We all remember stories more than we remember facts. It is, after all, why Jesus told parables.

Let’s...have more of Peter Moffat’s Silk series with its anti-austerity, pro-euthanasia storylines, if BBC commissioners choose. Or Jimmy McGovern’s regular left-field assaults on social taboos. And certainly more of Jed Mercurio’s Line of Duty — a drama as good as anything produced by HBO and rightly targeting police corruption. But could we just occasionally have something a bit more surprising too? Why are villains of BBC dramas nearly always the same? Thatcher. Business leaders. Bent coppers. Tory toffs. Catholic priests. American Republicans. The Israeli security services.

America’s cultural conservatives are some way ahead of their British equivalents in thinking about these issues. The American right may win as many political contests as the American left but they know they’ve lost the culture wars. And because they know politics is downstream from culture, that bodes ill for their future. The billionaire philanthropist Philip Anschutz has formed Walden Media to even things up. Over the past decade he has poured money into producing something different from the standard Hollywood fare. Walden’s most famous investments brought CS Lewis’s Chronicles of Narnia to the big screen.

Anschutz and Walden recognise that there’s a new establishment in place and want to encourage an arts scene that challenges this new establishment’s mores. The BBC, if true to its values, should want to do the same. Where is the play exposing the environmental groups who want to deny African children access to life-saving GM crops? Or how about a portrait of a world in which America has become isolationist, so terrorist powers run amok? The BBC could even try a comedy about the leader of a small European country who, despite being rejected by his own voters and being embroiled in a tax avoidance scandal, becomes president of the European Commission? Truth always provides some of the best inspirations for drama.

The problem, identified earlier in the same piece, is that:

According to Andrew Marr his employer’s bias reflects the large proportion of its employees who are younger, more metropolitan and more avant-garde than the average Briton. On their Facebook profiles BBC staff were 11 times more likely to identify themselves as liberal than conservative — at least until they were ordered to stop self-identifying. The corporation, Marr noted, “depends on the state’s approval at least for its funding mechanism and this creates an innate liberal bias . . . which is much more clearly expressed as a cultural bias than as a party political bias”.

All of which provides yet another reason why a large-scale blood transfusion is urgently needed at the BBC, most of it from very different blood types.
Posted by Craig at 15:43