Pontius Pilate and the EU referendum 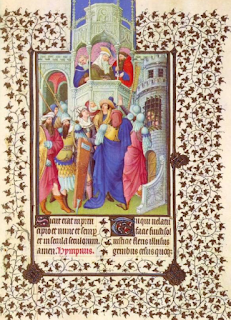 I'm an admirer of Howard Jacobson and his latest A Point of View was a typically powerfully-written piece - albeit powerfully wrong.

That it didn't persuade me is probably the result of one of two things: either (a) that I'm a 'post-truth' Brexiteer type who refuses to see the truth of his argument or (b) that his argument was weak, self-serving and full of fatal (self-)contradictions.

(Happily for me, as you can see I've gone with the second alternative.)

It was one of those pieces where, though claiming he hadn't taken a side himself, the speaker did little else but take one side and bitterly denounce the other side for doing things that he himself was doing in the course of his own talk. (Matthew 7:5 sprang to mind: "Thou hypocrite, first cast out the beam out of thine own eye; and then shalt thou see clearly to cast out the mote out of thy brother's eye").

The whole thing was absolutely perfect for Radio 4. HJ adopted anti-'post-truth', anti-'Brexiteer', anti-'Trump' and anti-'Farage' positions before launching into his main argument - that democracy isn't perfect; that 'the people' can be wrong and potentially tyrannical; that the margin of victory in the EU referendum result was very, very small; that the EU referendum result should not be regarded as binding; that it's good to change your mind; and that 'the people' (i.e. those who voted for Brexit) should, therefore, think again - i.e. Let's have a second referendum after the foolish have listened to the wise (like HJ and the BBC).

His closing point was worthy of Thought For The Day. He drew an analogy between the Brexit vote and Pontius Pilate's 'mini referendum' on whether to release the common criminal Barabbas or Jesus Christ. 'The people' made the wrong decision. Pontius should have asked them to think again.

Given the sheer weight of anti-Brexit broadcasting from BBC Radio 4, especially since 23 June, maybe it's time for us start endlessly using the term 'post-impartiality' to describe BBC broadcasting.
Posted by Craig at 15:40