A Tale of Two BBC Editors 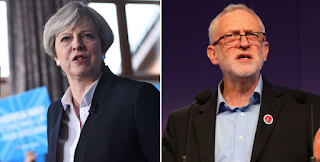 Just reflecting on the comments on an earlier thread here....

It is uncanny how easily we BBC watchers can (often) guess what the BBC will do.

One of our commenters, spotting the Jeremy Corbyn-friendly piece from the New Statesman's Stephen Bush on last night's Newsnight, made an informed guess that it would be 'balanced' tonight by a piece that would be anything but a 'balancing' piece.

He anticipated it being from someone who would "damn with faint praise and undermine her with 'helpful' criticism", guessing Ken Clarke or George Osborne...

...and he wasn't far off with those guesses. The 'balancing' piece is to come from Matthew Parris - a man very much in the Ken Clarke/George Osborne mould.

Also amusingly, given our commenter's prediction that it would be someone who would "damn [her] with faint praise and undermine her with 'helpful' criticism", Matthew Parris is the author of a very recent Times piece headlined, 'May has my vote but only with gritted teeth'.

It really is uncanny how easily we BBC watchers can (often) guess what the BBC will do, isn't it?

That is all very Newsnight though.

Even more amusingly, Matthew Parris has posted another Times piece tonight with the headline, 'I’m not quite Tory enough, or so thinks the Beeb', in which Matthew registers his surprise at the fact that last Sunday's Marr show dumped him because they were "worried" that he "wouldn’t be as tribal as Polly [Toynbee]" - Polly being another guest planned for the paper review (before the programme got cancelled due to the London terrorist attack).

Now, I'm on record here as being an admirer of the Marr show's editor, Rob Burley. This only increases my admiration for him, as it shows him thinking seriously about his programme's obligations regarding BBC impartiality.

He compared Polly and Matthew and felt that the latter wasn't a sufficient counterbalance to the former - and he was quite right.

In contrast, Newsnight's editor Ian Katz, typically, had absolutely no such qualms whatsoever. He was straight onto Matthew Parris (still firmly anti-Brexit, voting for Mrs May through "gritted teeth") in order to 'balance' Mr Bush's gently sympathetic piece towards Jeremy Corbyn with what is bound to be a far more...er...'nuanced' piece about Theresa May.

Evan Davis is right about one thing though. The BBC isn't entirely a monolith. Some BBC editors take their duties towards impartiality vastly more seriously than others who barely account it even worth thinking about.
Posted by Craig at 20:10